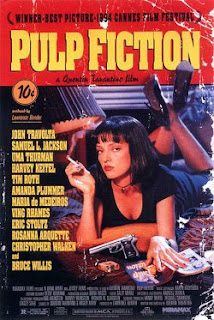 It's what you called showing in a culture or rather re emphasising a culture.

It's an important film and no doubt one of the most important ones to have come in the last 20 years. Not many films, threatened to change the rules of the game, as this film did. In terms of writing, it's non-linear, now non-linear in the real sense, it does not have a proper line of scenes or proper interpretation either, but they are connected by characters. This film has some iconic scenes which you will never forget. Like that, adrenalin shot scene to Mia (Uma Thurman) or reciting Bible's Eziekel 25:17 by Jules (Samuel Jackson).

Though, it's nearly 2 and hours, its not long and seems short as they are many questions unanswered. So, is Vincent dead or not? What is there in that briefcase to Marseilles? And these are left unanswered.
With just 7 scenes, you make a 2 and half hour movie that redefines in it's own way the perspective of the audience. So, I am amazed more than anything even as I watch it for nearly 10th time and the surprise keeps coming each time I see this. There is something that always works in PULP FICTION. But, what makes this film work is it's writing. It's writing like madness, there is no proper thing called this is it. It can be referred to anything and you may be right. The righteous man and the evil man interpretation is just a tiny example that can be taken out for how we can interpret a character.

If I want to write one favourite scene here, it's gonna be the whole movie coz I like everything in it. Technically, I like the cinematography, sound design and costumes. But above all, I liked performances and dialogues.

Thanks to Quentin who has given us more memorable movies in the last 20 years that are far superior in writing than anyone else. But for me, this is is my favourite Quentin film and I will stick with this till he out performs himself by writing something much more weird than this.

A sure 5/5 for one of my favourite films, no less ever.