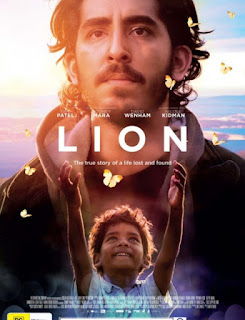 An emotional drama where I wept happily and would love to revisit the film again.

The film is a real story and that's what made the emotions so overwhelming. "Heart-rending", "Heart-wrenching", "Tear-jerking" and many such words would be an underwhelming description of what this film is. This is the story of a boy who lost his family in his childhood and found them back many years later and thanks to technology for that.

The performances are terrific my the whole cast and I loved the special performance by the kid "Sunny Pawar" who played the young Saroo. His performance was full of life and hope. The way he cried, laughed and felt loved was extremely moving and yet realistic. I was so happy with his performance that I dare say, he is one the finest finds in acting from India in recent times.

This being a film from Australian director with Hollywood production, I expected most of the dialog to be in English while to my surprise more than half of the film in Hindi. Also, most of the film seems to have been shot in India and it showed the real India, I mean the villages, the stone pickers and the lives of the poor. It was heartening and also heartbreaking such is the irony in India and it was captured beautifully.

The film was based in 1986 and then moves to 2008 and I was in awe of the production design. The coal engines of trains, the roads, the poverty in 1980's were depicted realistically with great finesse and detail.

Garth Davis is a director to watch out for, I feel he chooses the right subject matter and makes it believable. He kept the film rooted and authentic and that's where the film scored huge points. I hope to see more such hopeful films from this director.

A 4/5 for a movie that made me sob for a good part and yet made me happy at the end.
Posted by Brad Dugg at 11:12 PM No comments: Links to this post A film more about a father-daughter relationship than about Steve Jobs.

I was surprised but I felt the film was breezy with terrific pace aided by great dialog.

Michael Fassbender gave one of the finest performances of his career as Steve Jobs. He was ruthless, passionate and to-the-point. He did not put Jobs own ever and I firmly believed he would have loved Jobs personally to portray Steve Jobs the way he did. Kudos to the other cast and especially Kate Winslet who played the role of Joanna Hoffman. Kate Winslet was thoroughly professional, in demeanor, body language and the way she handled Steve Jobs and certainly, this is one of the strong performances of her career.

Apart from performances, I loved the screenplay. Aaron Sorkin who gave a terrific screenplay with "Social Network" has given another fast-paced dialog oriented screenplay that started in haste and ended in whizz with no-much unnecessary scenes or drama. The film began with a denial and ended with acceptance (only a hint from my review). What the film is about, can be read in Wikipedia and other reviews but to see it is a treat. This is a tight must-watch screenplay. How 2 has passed off so quickly without giving space to blink and yet full of dialog. This is something I am wondering even as I write this blog.

Danny Boyle has limited the sets to Apple Office and Apple Keynote Conferences mostly and yet and he has done a tremendous job in terms of direction. I would rather say, the screenplay helped him in a big way to just make actors emote to their lines and capture the ambiance through the camera.

All in it's a fast-paced slick film made with terrific dialog and helped with good performances. But there is hardly anything we can take home about Steve Jobs except his reluctance in fathering a child and finally accepting that he is the father.

A 3/5 for this and I thank Aaron Sorkin for giving another tech industry based screenplay that is actually good.
Posted by Brad Dugg at 5:52 PM No comments: Links to this post

Posted by Brad Dugg at 11:44 PM No comments: Links to this post

Posted by Brad Dugg at 11:18 PM No comments: Links to this post 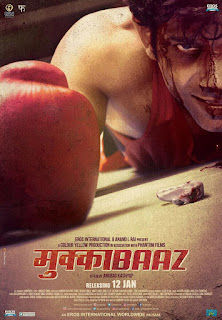 This is really good cinema. The silver lining strikes again but this time with strong punches.

In most of my reviews, I call Anurag Kashyap as “Silver Lining of Bollywood” and he proves it again with “Mukkabaaz”. Last year there was a film on Boxing that is “Saala Khadoos” and we also had a good film on Wrestling as “Dangal”. Both of them had their own flavor but this film has the touch of one and only Anurag Kashyap. This film is not a success story. I never expect one from Kashyap as that is not his forte and I don't expect him to give us a biographical success story either. Even if he gives us a biography, it would be dark and raw.

The film is set in Uttar Pradesh and it has the flavors of Bareilly and Banaras both being blend well. The dialect, the body language of the people, the office environment everything is authentic and it's heartening to see the lower middle-class environment come to screen without any frills or drama.

The dialogues are amazing and the acting is sublime. Zoya Hussain nailed it as a dumb girl while Jimmy Shergill played the strong villain with ease and terrific body language. Ravi Kishan was brought in more so because of his background rather than his Boxing skills and he played his part well. Above all, the film belongs to Vineet Kumar Singh who played the role of Shravan Kumar Singh. I see a connection as he was born in Banaras and there seems to something to do with his nomenclature as well.  Vineet is terrific and true and I hope he will be an actor who will take Indian cinema many notches up. I appreciate Vineet's dedication and his writing ability as he is one of the co-writers.

The technical departments are all in great form and everything was coherent. The lyrics match the visuals and the sound matches the scene and that was amazing. The sound is what is terrific in all Anurag Kashyap films and this film is no different. Anurag amazes me each time with the choice of soundtrack and I love it.

Anurag Kashyap literally spits on politics in Indian Sports with this film. Although this is his most clean film, he showed how people are being falsely accused and beaten up for having cow meat, how casteism is in ruining our country and how the power of caste is being used. I loved the way he sarcastically used the line “Bharat Mata Ki Jai” - just loved it I would say. He basically knocked it out of the park with strong punches. I hope this film opens up eyes to Sports Federations and Authorities and they weed out the politics from the system and give us true champions.

Salute to all patriots of the nation and to all the sports lovers in the country. I hope this country learns it's lessons quickly and starts building infrastructure and becomes a great nation by acknowledging the true talent and giving opportunities for all those who aspire to make it big. We shall then be great winning awards and medals in International events like Olympics.

Loved the dialogue "Sapnon pe hag chuke ho, ijjat pe moot chuke ho, ab mooh pe thook do!!!" the sprinkling of humor is blended in the language itself than being forced in and that is organic.

A 4/5 for another gem from the man who makes cinema for cinema's sake. I doubt if this will be winning any awards or any monetary rewards but this is a must watch for those who love authentic Indian cinema.

Posted by Brad Dugg at 10:38 PM No comments: Links to this post

Posted by Brad Dugg at 3:21 PM No comments: Links to this post