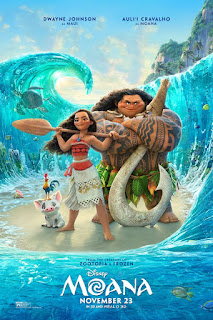 A typical animated film that is a fable made as a musical.

This is for children only film is what I started feeling after the first 10 minutes and as the movie ended, I concluded that this film is made for kids up to 12 years specifically.

There are too many songs to my liking and the story is pretty juvenile. Although there are south pacific cultural elements added, the story is fable-like and in almost every folklore there shall be a hero who has done amazing things fighting against odds. In this film, the hero is the daughter of a chief. She is brave, dares against superstitions and goes all the way for her people to be happy and prosperous. Ah, how many times I have seen such themes and almost similar films. How to be a leader, a king. This plays the same theme in a different backdrop.

Looking at the trailer, the film seemed so different than it really is. The songs are too many and the editing is pretty ordinary. The graphics, the colors are as great as any other Walt Disney movie. Yes, Disney has set a stupendously high started in animated films which other studios can only emulate but hard to beat. I loved the richness of visuals but got pretty bored by many other aspects.

A 2/5 for this film. Though not so much of my taste, I suppose this will be loved by kids.
Posted by Brad Dugg at 12:51 AM No comments: Links to this post 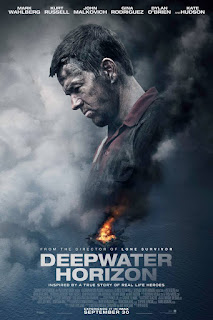 An engaging film filled with good action and acting.

This is a film based on true events of oil rig explosion in 2010 in the Gulf of Mexico. In 2010, I was in Florida in 2010 April and I remember warnings in news channels to avoid beaches. Florida is a state known for its beaches and in June and July, we were told not to get into the sea as the oil spillage has done a lot of damage and it would be hazardous. This movie rekindled those memories.

The acting is good and pretty casual I would say. It’s professional I must say to go out and play real people and be natural as oil rig workers and talk their language. From a Magenta warning to cutting the pipe, there are some layman words yet there are some technical words which would be understood better by those working on the oil rigs. Despite, the language, the action is so good that it kept me engaged till the end.

I knew this was a survivor story and also who would survive can be made out by the roles each actor plays and also if we know the story of Deepwater Horizon. Yet, the packaging was done well with respect to how it all began and how someone’s reckless attitude lead to a catastrophe.

The direction is good, the visual effects are great and the acting is terrific. I am not singling out anyone in acting as the ensemble cast did a great job together. The writing is precise and the editing is pretty decent cutting it to just 107 minutes with hardly any dull moments. 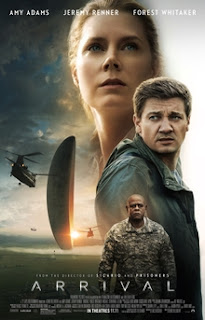 A film that is designed for a debate.

The film tries to raise questions on many dimensions. The film questions the craft of screenplay and the technique of film writing on one level. At the same time,it questions the existential questions on death, our view of life and how loved are our loved ones. How important is communication and what are the difficulties in the case of an alien insurgence.

It pushed me to the edge by the end of the film without any rush, any big thing happening and even 4 days after watching it, it's keeping me in the "Arrival" zone. The name Arrival itself is deceptive for the film. It's not just about aliens or anything, it's deeply human and that's a great achievement.

The editing is done amazingly well. Though the film seems slow and literally nothing much happened in the 116 minutes, yet everything was connected superbly at the end. Actually, it was a shocker for me. What I expected and what I got was hugely different and yet it left me wanting for more.

Acting is superb by Amy Adams and by Jeremy Renner. There is poise and composure to their characters which is rare as compared to protagonists of a sci-fi film. Oops, I expected this to be a sci-fi film too, but it's a deliberately well made emotional drama in the guise of a sci-fi film.

A 4/5 for this wonderfully made movie.
Posted by Brad Dugg at 6:22 PM No comments: Links to this post