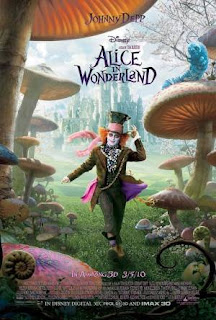 A wonderland that is dreamy and funny and simply wonderful. A trip that we take on in dreams.
Alice has a dream and the whole story is a familiar story for most who have known it since childhood. But never have I seen it come off so wonderfully with exquisite costumes, art direction and the graphics that are so intrinsic. Once you have the whole feel of it, then each characters come across with a panache that is their own, be it a stalwart like Johnny Depp or a Anne Hathaway, all take the story forward in a way that is so engaging and also enticing.
The  music took me in and was fantastic, it was aptly creepy at most times and it was thrilling too as the trip went on. The finale music is just a great one though the finale fell short of lot of my visual expectations. I must say the movie got dragged right when Alice met White Queen and since it started to loosen a grip on a suspense thriller it held to for thus long.
All performances were very very engaging and they all induced a character of their own and this appreciation goes to Burton for extracting such performances.
Burtonish and Johnny Deppish. It's 3/5. It is good for now but surely could have been a Wow had the finale been better and the movie been shorter.
Posted by Brad Dugg at 12:04 AM 1 comment: Links to this post

In vain goes a night as the beauty goes out of sight
But hope is still there, that one night shall be very bright
She has left me in the lurch
And in tears, I came to church
To plead with the lord so that I can hear
From her just once more so to clear
Those clouds of guilt and to curb my fear
At an ungodly hour of the day, I do pray

A short film written and acted by me.
Posted by Brad Dugg at 9:31 PM No comments: Links to this post 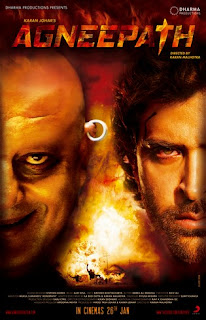 This film took a path of fire and came out firing.
Nice remake, I must admit and I liked many bits of it barring a few which as I said to my friend "I will give in to such few things".
Power-packed and intensifying, this is one drama of vengeance that will go well how many times to make it. But only one rule, it has to stick to the plot and performances have to be to very intense to engage the audience. This movie wins in performances. Hrithik Roshan stands out and so does Sanjay Dutt, all other actors just pitch in aptly  and it sticks to the plot of vendetta. The more imaginative it is, the much better it will be and this one comes in all guns blazing. Sanjay Dutt comes as a surprise and turns out of one the best bad guys of recent times. Hrithik Roshan is a rare actor who does not need lines, a look through his eyes says it all and so very good in this film, he may even win the best actor for this year if something equally riveting or better than this does not come along.
The most prominent thing to notice apart from Hrithik and Sanjay is the background music by Ajay-Atul. I am not sure how many movies in recent times have really had such good background scores and all appreciation to the music director duo.
It's really a path of fire coz to remake a movie that is made as recently in 1990 and then give its own interpretation or identity is a tough choice. Firstly the comparisons are very nervy, Vijay Dinanath Chahuhan as Amitabh Bachhan is still in my memory and the way he delivers , "Naam Vijay Dinanath Chahuhan", in police station is still very good. Now, most of that was reinterpreted for the good of it and it all came out engagingly, specifically the screenplay took care of many aspects.
Also, the cinematography and art direction have to be commended. Dialogues by Piyush Mishra are in fact terrific. Just a mention of the raunchy fast paced item number Chikni Chameli, liked it for its pace and thanks to Shreya Ghoshal for singing it so well and for Katrina Kaif for dancing superbly.
Yet there were flaws and the biggest disappointment was editing, a few flashback scenes were not needed and so was a song of a wedding of Rishi Kapoor's son, that song felt more like a distraction than being in film.
Hirthik Roshan, Sanjay Dutt and Ajay-Atul made this movie worth a watch.
I go with 3/5 but again it's a bollywood typical masala film. So go have fun.
Posted by Brad Dugg at 10:22 PM 1 comment: Links to this post

Posted by Brad Dugg at 1:00 AM No comments: Links to this post 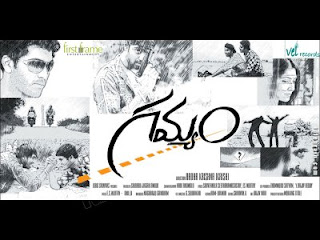 Written with good intent made to entertain solely, this is a compromise of sorts.

To be frank, I have seen this film for the first time and was very disappointed to sit all through the 2 hours journey of it.

It's a journey of a rich brat realizing the truth and life as a whole. It tries too hard to pass on a message and to entertain at the same time. Bad acting by it's main protagonist Sharwanand (who has till date made offbeat films) lets the film completely down. The locales selected are good but showing them is too immature, if you have to capture an emotion of a character you can show his face in a close up rather than showing the whole of the background scene. Also, the music is a major hinderance and I would request the directors to keep music out of such films they act as spoilers more than songs. All, in all it's a badly made film but still written with a noble intent.

I would credit the writer director Radhakrishna (Krish) for his writing abilities more than his directing abilities. For cinema's sake, one must understand should he himself direct the film or write and let some other person direct it. There are too many unwanted aberrations and scenes that made the film a bland thing rather than an engaging watch.

The story is of a self discovery of a rich brat who used to see world through his bungalow or car windows, he takes upon a journey on bike to seek his love. And in this journey meets our hero (Gali Seenu), seriously Allari Naresh has done this role superbly well and for me is the hero of the film. Also Kamalinee Mukherjee just complements to her role Janaki aptly and thanks to dubbing by Sunitha.

It moves from one place to another from Hyderabad to Kurnool (yaganti) to Narasipatnam. It shows the milieu of Andhra Pradesh but the characters are too cliched and ineffective. Many a time, dialogues seem so fabricated and unnatural. (reason may be I was watching this alone at home and had I watched in theatre, reaction can be something else, sorry for the analytics).

From feudal henchmen in Kurnool to Naxalites in forests of eastern ghats, it moves and shows the world that we seldom see. But was so much necessary for a self discovery? is what I seriously asked.

Few dialogues as below just give a glimpse of what the movie is "I have seen the world, paris, london not seen such poverty there" is where it begins and at the end our protagonist says "I have seen everything, from giving a baby's birth to Seenu's death in my own hands" so that may well give you a measure of what this movie is about.
I would still say it's a very well written screenplay and dialogues strike the chord too. But all this is taken a back seat by bad direction. Bad direction examples

1) Seenu getting his wound healed by Janaki and Abhi does not even see her face. Too filmy boss
2) They get into Naxalites ok fine but was killing of Seenu so very necessary
3) Was Brahmanandam a character or a caricature
4) Is getting in a recording dance an attempt to include an item number or showing a culture of our state or to take the story forward, never got this logic.

It's much overrated or may be we never saw quality cinema yet of self discovery that made this movie so very good for most of the viewers. Go see Good Will Hunting or better Motorcycle Diaries (from where this film was inspired)

For me, it's average 2/5. Sorry Krish, hope you make better movies than this. Also, "of the whole money spent, this film could have been much better with half the budget, dont add songs and remove the Brahmanandam episode and your budget will be cut."
Posted by Brad Dugg at 7:40 PM 6 comments: Links to this post