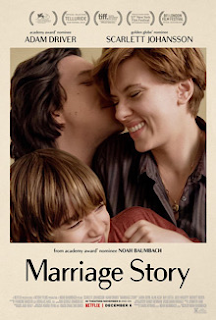 A movie that moved me for the way it depicted contemporary relationships.

Marriage is part of life but family is definitely life. This is what I believe. Now the definition of family will differ from person to person. For a few 'family' includes their parents and for a few 'family' to begin after marriage. But once we decide what is family, we hold on to it, despite our own flaws or the spouse's flaws. Family means being there for each other and holding on what we made.

It is definitively one of the best productions I have ever seen by Netflix and on Netflix. Thanks to the director Noah Baumbach and the actors Scarlett Johansson and Adam Driver who have given superlative performances. Adam Driver brought tender nuances to his highly self-centric character that made his performance stand out and kudos for such portrayal.

Also, I am appalled and astonished by how biased the system is for women. Empowering women does not have to weaken women but in reality the world over, men got to pay a lot more than women do. Just another day when my friend said 'Separations are tricky', I didn't get it fully but now after watching this film, I got it to an extent.

The separation ordeal between Nicole (Scarlett Johansson) and Charlie (Adam Driver) is extremely realistic and indeed highlights today's existing reality. That part although, the most sensitive in the film was also the most hard-hitting. Applause to the director for the way he handled this.

In one dialogue, Nora the lawyer of Nicole says that "The idea of the caring father who dedicates to uprising children and enabling his partner to follow a career is a very recent one as recent as last 30 years" And yet surprisingly, they got to pay hefty sum to the women and this I believe is the take away of the film. This film is a critique of the current legal system for divorce and the way it's all played out is interesting.

The pace is a bit slow and I understand that the content demands it that way. Apart from the pace, I loved all aspects of this film.

A 4/5 for a superb drama on marriage and the legal system.
Posted by Brad Dugg at 12:17 AM No comments: Links to this post