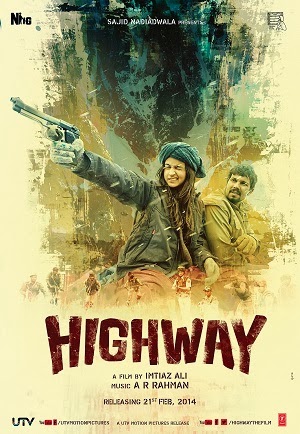 I love A R Rahman. He is the man behind much of this film. The sound, score, music are just wonderful.

I am not a big fan of the director Imtiaz Ali. I disliked his "Jab We Met" and I liked "Rockstar" only for Rahman's music and Ranbir's acting. In "Highway" too though Rahman speaks so much with his music but Imtiaz under utilized the songs than their full potential. Yet, I liked the film and indeed is a much better film than Imtiaz's earlier ones. In first half there are only 2 tracks and the remaining tracks come in the second half. This created a kind of imbalance and I wish they could have been spanned out well.

Soulful songs like "Patakha Guddi" and "Maahi Ve" got me hooked to the music of the film and made me wait or this. It's very rare that I see a Rahman's film in theatres coz I am very apprehensive how his music will be used. Barring, Roja, Lagaan, Rang De Basanti, Bombay, Taal and a few others, his music was used with incongruous visuals and that makes me feel sad for the genius of Rahman. In Highway, the light lilting lullaby of "Sooha Saha" was well used and the extremely philosophical "Heera" was wasted.

Apart from music, the second best thing was cinematography. Wow, was the expression for the way few locales were shot. The water flow, the clouds on mountains, the valleys, the snow capped himalayas. It was serene and beautiful. It was like a cheap vacation we had. A wonderful road trip was made with camera that spanned few states.

Now, what about plot and story, there is hardly trace of a strong story or a big plot. Yet, there are characters, unreal Veera played by Alia Bhatt and more unreal Mahabir played by Randeep Hooda. Alia does give a wonderful performance that is nuanced well and indeed at times she goes full throttle. Like in a break dancing scene. Damn, that was too good. While, Randeep as Mahabir gave a poised performance with a great Haryana accent. Imtiaz for sure has extracted great performances from their actors.

The pace is too slow and hardly something happens finally. Yet, it's an endearing story that spits on the hypocrisy of the society in a very subtle way. There a few philosophical moments too which are far off but well toned.

A 4/5 for this and I am sure many would not like it as they would be expecting some story, some plot and something to happen. But, as nothing much happened, I gave a wow to this. This is more like poetry than a novel. And I love poetry so, thus my love for this.
Posted by Brad Dugg at 2:02 PM No comments: Links to this post 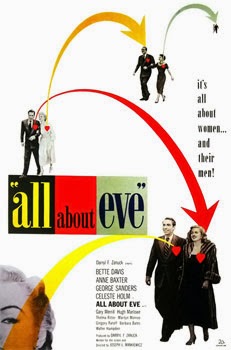 A fine film, but fell short in my expectations.

I read considerably well about this film, before watching it. Also, this film had some similarities to another film "Sunset Boulevard" which was released in the same year. While the latter was terrific in writing and wonderful in acting. This film, All About Eve is different in terms of writing and involves 4 principal women who have their friendships, their careers at stake.

Eve Harrington played by Anne Baxter seems to be an extremely determined woman who goes to any length to get what she wants. From creating a false story to coldly intimidating her friend for a role in play, she is cold blooded and yet adorable. Anna Baxter played the role superbly and credit goes to the writing and her lines, more than half her job was done by the good writing itself.

The next most important character, I saw was of Margo Channing played superbly by Bette Davis. She is generous and yet very possessive and has a humane nature under the embellishments of fame. She is indeed the true gem of the film and takes the script and writing to a high by her portrayal of the character. "Tonight I forgive all, I forgive Eve" can't be said in much more cold way than how Bette said. Great acting by a superb actress.

Even the other women, like Celeste Holm who played Karen Richards or the final character that is "Phoebe" played by Barabara Bates or even Birdie played by Thelma Ritter are well written and played well. This is essentially a film about women more than men.

The production design is superb and the music adds to the drama. I wish, the editing could have been better and the dialogues were crisp. Especially the long climax between Karen and Eve could have been cut short. Also, many moments would have been done away with reducing the time and also easing out the pace. Perhaps, the director Joseph Mankiewicz had been persistent to give detailing to every scene and thus made it the way it stand today. It's fine though but I wish it could have been greater than being just good, as per me.

A 3/5 for this, I liked it nevertheless, yet did not fall in love with it. I loved "Sunset Boulevard" though. I expected this film to be better and maybe that is the flaw, it's just good by all means.
Posted by Brad Dugg at 2:56 PM No comments: Links to this post 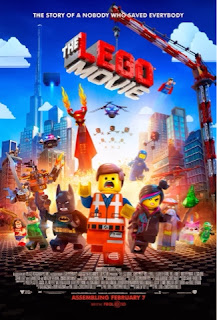 A fun film that made me a kid. Of course, I am already a proud kid.

Never since TOY STORY 3, I had so much fun in an animated film. Also, this film made me nostalgic as I used play with Lego toys when I was a kid. So there are some personal things that are attached with this film, and indeed they drove me to the film more than the trailer of the film itself.

The film is a simple, the premise that an ordinary guy can become a hero, only if he believes in himself is well presented. It's not a film that has epic conflict or great story. But it's charm lies in the writing, the wit that is inevitably laughable. Most were laughing out loud in the theater, from my 4 year nephew to a 70 year grand uncle.

The animation is surely top notch, we have to consider that making a 3D film with real toys is really challenging, and that's where the animation industry in Hollywood must be praised for. Their quality of animation just keeps getting higher and higher and it's so wonderful for the cinema world over.

The music plays a vital role is conveying that indeed "everything is awesome". Also, the well choreographed events and the detailing of the animation is great. It's all colorful and pleasing to the eyes and the 3D technology gets due justification in a few scenes too.

I am going with 4/5 and would love to catch it again at the theaters with more kids around, I loved it and hopefully if you ever see it, the kid in you is revealed or you are helped a great deal by your own kids.
Posted by Brad Dugg at 12:25 PM No comments: Links to this post