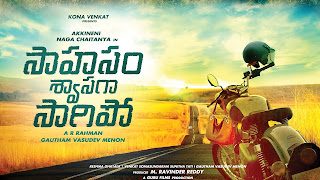 A film that is plotless and pointless. A film so pointless that even the great master of music could not help.

I did not like the film for the following reasons:

1. The hero does not know how to pronounce Silhouette (he pronounces as like sil-hout). He has an SLR at home and does not know how to spell the photography term. Basically, he does not know either English or Telugu.
2. The hero does not know how to emote. He does not know how to give lip sync either.
3. There is nothing called cinematography, the faces are shot straight. Lazy photography.
4. I did not like the timing of songs especially, "Vellipomakey".
5. "Vellipomakey" is terrible in Telugu while "Thalli Pogathey" is awesome in Tamil.
6. The road trip is so convenient that I disliked the taken for granted writing of the trip.
7. Did not understand how the guy gets keys of an unknown Royal Enfield in the second half.
8. Actually, did not understand how could the hero stuff so many clothes in one bag for the road trip.
9. The plot, Theme, Characters, Action - Nothing is memorable but my dislike is so strong that it's hard to forget.

It's been more than a week since I saw this film, trusting some rave reviews by friends. But, I could not help myself from writing this review to vent my anger.

There is a reason why I am very afraid of watching films with A R Rahman music. In Hindi, they justify it much better than in Telugu or Tamil films. So sorry, ARR, you gave your best but others messed up everything else.

I love 3 songs
"Thalli Pogathey" - yes Tamil version only. Rap is Telugu is not apt.
"Chakkori" - lyrics in Telugu are decent.
"Taanu Nenu" - liked the lyrics.

A 0/5 for the film and 3/5 for the album. I seriously pledge never to watch a Naga Chaitanya film in the theater again.
Posted by Brad Dugg at 10:39 PM No comments: Links to this post