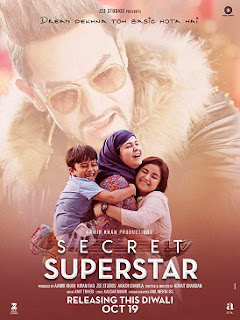 A film with good intentions and executed well.

There are a lot of films with a similar theme and they also end predictably but only few capture a place in our hearts and this film is one the heart capturing film. The content, the context, and the conflict are all on predictable lines yet the performances are heart winning and the girl Zaira Wasim has conquered mine. This is a superb follow up to her performance in "Dangal" and I sincerely thank Aamir Khan for giving us another heartful film.

Aamir Khan is the only actor in the Hindi Film Industry who gives extreme importance to content before producing them. I must say, since Lagaan, I have watched each one of his productions and barring "Delhi Belly" I have liked all the films. He has a taste that is above par all his contemporaries and he knows how to narrate and his passion for perfection just keeps him going and as an audience, it helps me watch some great films.

This film is good overall but the melodrama makes it stretched and tad lengthy. At least 10-15 minutes less would have done a world of good and made this film an amazing experience is what my personal opinion is. On the flip side, if anything was cut, then the conflict, the nourishment of ambition would not have been so well established. Overall, first half was stretched and the second half was a breeze (thanks to Aamir Khan's presence in the second half).

Aamir Khan as "Shakti Kumaarr" (double A and double R) has the swag that is needed for the character. He is an actor who can carry any role with great ease and style and he does the same as "Shakti Kumaarr". Just another feather in his cap, this special performance would be. Despite the presence of Aamir Khan, it's the performances of Meher Vij as "Nazma" and Zaira Wasim as "Insia" that have stolen my heart and my appreciation to them. Zaira is just 15 and she has a bright future ahead.

This film is a musical and thanks to Amit Trivedi and the young singer Meghna Mishra. Amit has given us some wonderful music in the past and he continues to do so. Meghna is a great find and she has an amazing voice that complemented the performance of Zaira wonderfully. Thanks to Amit Trivedi for giving us few songs that shall be on my playlist.

A memorable debut by the director Advait Chandan and I hope he keeps churning and delivering such inspirational stories in his career further. A conventional event of elections told in a straightforward realistic way that not only provokes but convinces that a change is needed.

Acting is above par and extremely realistic in the film which made the film engaging. Watching and appreciating the actors was an involving experience in itself. The issue was handled in a realistic and non-dramatic way which may put off the conventional film-going audiences but that non-conventional approach was what made the film special.

The sound design is worth a mention. There is little background music and mostly silence and yet it was extremely effective in conveying the mood. The cinematography is actually pretty decent considering the subject and also the scale of the project. Editing is terrific I must say, there is never a dull moment in this 105-minute film and given the limited scope, it's a job well done. The dialogs hold up pretty well and there is dry humor sprinkled all over the film. Above all, it is the performances and the straightforward screenplay that take the accolades.

I have loved Rajkumar Rao in "TRAPPED" earlier this year and I have loved him as "NEWTON" now. Let me give a spoiler (from the trailer itself), his actual name is Nutan Kumar and he has changed it to NEWTON. Rajubir Yadav brings his experience and subtlety needed to his role and he has sung a song too. Anjali Patil the only girl in the camp does a fine job. But it is Pankaj Tripathi who has bowled me over with his performance as an Army officer. Others were good too.

Amit Masurkar is a director to watch out for in the coming years and thanks to the guys who chose to produce this film.
Posted by Brad Dugg at 1:32 AM No comments:

MY RANTS ABOUT APPLE 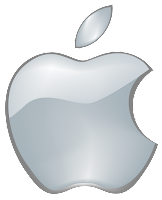 
Before I begin ranting about Apple and it's products let me confirm that I am a consumer of APPLE products and found my love for APPLE began in 2008 with iTunes. Till 2012 or even 2014, I loved APPLE products but since then my rants about APPLE began. In this blog, I would mention a few that I have been assimilating since over a month of the last APPLE KEYNOTE on Sept 12th 2017

I have witnessed the unveiling of the latest products from APPLE this Sept 12th and I must say I am not surprised and more so disappointed with Apple despite being an Apple fan. Apple is diversifying a lot more in technology and thus losing homogeneity of the products. Here is my list of qualms which I hope somebody in Apple takes note of

1. Apple Watch - Super happy that Cellular connectivity has come the Apple watch but a question on when can we track Gym (strength exercises) sessions on the watch. As far as I know we can still only capture and track the Cardio session like walking, running or even swimming in the watch. Till the capturing of all the activities happen. Apple watch is not worth a buy.

2. Apple Health - now that I put my qualm about watch. Let me put out my crib about health app integration. It's understood that perhaps there are not enough sensors to track strength activities but there are apps where we can track and log our workouts. I hope that these are logged into the health through application integration and the respective calories burned are shown. But when would Apple do that, I doubt atleast in 2-3 years it will not be done. Till then full bloom use of Apple Health app is just a myth.

3. Unified ID for unlocking please - Before iPhone X, there was just touch id for unlocking the phone. But now we have face ID from iPhone X and this adds to the concern we have for macs. Very recently unveiled macs (from 2016) have touch id within them and with face ID seeing the light of the day, will Macs be updated with face ID too. This won't happen till 2018 October at least. Now this seems kind of redundant to me. A technological change in one platform should be cascaded to other platforms as soon as possible. I won't say I am disappointed that Apple took away my beloved touch id from the iPhone X totally. Perhaps "The future of smartphone" doesn't need a touch for unlocking but it's not in the DNA of apple to hang on to old technologies while moving to a new one. Their transitions have been radical and that's what makes Apple. So request to have a unified way of unlocking on all platforms (iPhones, iPads, Watches, Macs) as soon as possible.

4. Unified port for all the products and accessories - there can be one or two kinds of ports for the company to have it's own ecosystem but not three or four please. "USB-C" port received a lot of push since the launch of Macbook 2016 and there is the proprietary "Lightning" port for the iPhones, iPads, Airpods etc.. and these two ports should be what Apple should stick with and eventually make "USB-C" as the only port across all products and accessories but that's not what Apple seems to want or try. Instead it is keeping the "Micro USB" port alive on it's beats accessories and many supported MFi chargers. Then, there is USB-A still alive on iMacs (I hope to see this changing in 2018). Request Apple to give the push that pushes the whole industry standard rather than living with the obsolete (unwanted) ports. There is some core Apple philosophy that I see missing in keeping these legacy ports alive. No more USB-A to lightning cables please only USB-C to lightning cables.

5. About Apple TV 4k - One question is why no support to Dolby ATMOS. How is it justified that we have a great video but no great audio support. Not done Apple.

6. Apple Music - I don’t like the fact that lyrics will be seen only when there is WiFi or mobile data. When I downloaded the song and have it as offline then why is there is still a need to be on data to see the lyrics of the song. Just illogical.

a. Why cant I add location services in Control Center
b. Why can't I use find my iPhone when the location services are off.
c. Why is it not so easy adding cricket matches/sports events to a calendar as compared to google calendar
d. Why can't I customize tap controls on Airpods (yeah, Apple's latest innovation) rather than double tap default controls.

The list is on and I hope Apple fixes them sooner than later.
Posted by Brad Dugg at 9:18 AM No comments: