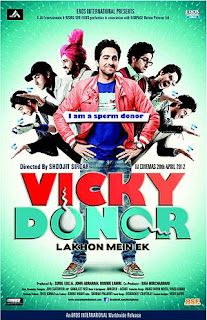 An easily entertaining film that does not demand much from us and leaves us with something to think about.

The premise is set when the statement "Many would have enjoyed parenthood if sperm donors were available" sets the tone of the movie right upfront and it carries it all through. Shoojit Sircar the director must be applauded for taking a subject that has not been dealt before in our Hindi Cinema and producers like John Abraham should be appreciated for helping the idea become a film.

All through the film, the one thing that is so very good is the chemistry between the actors. Especially the camaraderie or chemistry of Dr.Baldev Chaddha (played superbly by Annu Kapoor) and protagonist Vicky Arora (played competently by Ayushmann Khurana) is the one that stands out and stands tall. Annu Kapoor slips into the role so fluidly that Chaddha seems so very obsessed with sperm that we forget that Annu as him, and consider him only as the doctor.

When such a novel subject is being filmed and if the subject is a kind of taboo considering that it involves the subject of sex, then there will be a lot of temptation to over hype this. But Shoojit holds it back very well and indeed underplays it with the other digressing points like relationship between Vicky and his grandmother or bringing in a newcomer and beautiful Yamini Gautam as Ashima Roy and builds a beautiful love story. The idea though seem to slip off, it keeps coming back in the form of Chaddha and he fixates himself in Sperm stubbornly. Laughter, fun is derived from many moments of the film and that's the main reason watching this film is effortless and entertaining.

Also appreciable is the dialogue which does not make us watch it seriously but mostly with a smile on our face. The song "Paani Da Rang" which is a wonderful number is used well too. All in all, Shoojit Sircar is a director who made his mark with this film and I hope his endeavours will get bigger and better as he rolls the camera in the future.

Happy to have seen this, late though but better late than never to watch a good film. I am going with 3/5 for this. Two points down coz this does not have the repeat value as such. Maybe coz dialogues are too easy to memorise.
Posted by Brad Dugg at 11:30 AM No comments: Links to this post 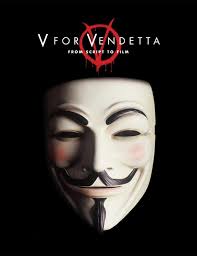 A thoroughly adventitious, thought provoking film. It glorifies anarchist and nihilistic feelings within.

The scene where V (Hugo Weaving) introduces himself to Evey (Natalie Portman) is in itself a masterpiece in dialogue writing.

Here I present you the dialogue

Evey Hammond: Who are you?
V: Who? Who is but the form following the function of what and what I am is a man in a mask.
Evey Hammond: Well I can see that.
V: Of course you can. I'm not questioning your powers of observation; I'm merely remarking upon the paradox of asking a masked man who he is.
Evey Hammond: Oh. Right.
V: But on this most auspicious of nights, permit me then, in lieu of the more commonplace sobriquet, to suggest the character of this dramatis persona.
V: Voilà! In view, a humble vaudevillian veteran, cast vicariously as both victim and villain by the vicissitudes of Fate. This visage, no mere veneer of vanity, is a vestige of the vox populi, now vacant, vanished. However, this valorous visitation of a by-gone vexation, stands vivified and has vowed to vanquish these venal and virulent vermin vanguarding vice and vouchsafing the violently vicious and voracious violation of volition.
[carves "V" into poster on wall]
V: The only verdict is vengeance; a vendetta, held as a votive, not in vain, for the value and veracity of such shall one day vindicate the vigilant and the virtuous. Verily, this vichyssoise of verbiage veers most verbose, so let me simply add that it's my very good honor to meet you and you may call me V.
Evey Hammond: Are you, like, a crazy person?
V: I am quite sure they will say so. But to whom, might I ask, am I speaking with?
Evey Hammond: I'm Evey.

After reading that absolutely mind blowing piece of writing, I really doubt if whatever I review here is  read or even pertinent. But on a more personal note, It's important to me as a person to stand up to something, stand up to my conviction, my own beliefs and disbeliefs, to stand up to my own self, that has made me. To stand in itself is a great thing but to stand up against everything, demands a character. A character that may be disliked, ostracized but shall nonetheless have one person who embraces it and who shall become the company of him or her for as long as he is alive. Now, the question that always bugs me how many do have character, how many question, how many seek the truth, how many seek reason.

The answer as it stood always is 'hardly any'. The reason is most men and women are moulded by beliefs that some others (be it parents, society, teachers) have embedded in them, but should they seek reason, they might have their own varied reasons and that would make him "HIM" or her "HER". I cannot put this succinctly but I hope you are getting what I am trying to convey.

I was told that 9 hours stay is a rule put in office, I asked for a reason, I was presented with one, I did not buy that reason, so I do not follow that rule. So am I an anarchist? Yes, coz I do not follow rules that are not substantiated with reason. But still I have my own little discipline, my job pays me something, so I have to give back what I am expected to from my job. So that's the discipline I follow and the only thing indeed.  Ok, now let me sway back to movie, the purpose is to review it, but it triggered such nihilistic and anarchist thoughts that I was bound to put whatever I did above.

Hugo Weaving has a voice that is so haunting and manly that even though he wears a Guy Fawkes mask, we know that for sure behind that mask is a man who is strong enough to seek command just by his voice. Hugo Weaving plays V with a command. Natalie Portman as Evey plays her part sublimely well. The way she sleeps in Jail is enough for me to convince she is a good actress. All others, have done exceedingly well in there roles. But what made the movie so special is the environment, the dialogue and the way characters are developed, you have a villain, a hero, a heroine and a setup, all are placed well and told us to supremely so that's what makes this a great film. For whoever worked on the fireworks in the film, a big thanks to them, coz they were so gorgeous.

I ca't say much but I loved it, I can relate to it coz I am a questioning person, an anarchist myself who has a discipline. You don't break rules that are formed with a reason that are made to make everyone happy and not just a group of people. Like driving on one side of road, not breaking signals etc. But rules formed without a proper reason, rather a reason your conviction does not buy then it need not be followed.

By rating this film, a 5/5 I am just completing a mere formality. But I warn each one of you (those reading this) to give this film some time coz this is not an instantaneously engrossing film, it grows with time. Inside most of us we sure have a V, but sadly we forget that there is one and succumb to the comforting herd called the world.

My tiny tribute to this is here

http://braddugg.blogspot.in/2012/05/v-for-vendetta.html
Posted by Brad Dugg at 7:13 PM No comments: Links to this post