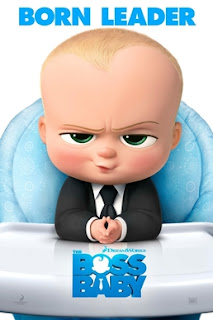 Good entertainment with some good voice overs make this a watchable film.

The story line is actually refreshing for me. A baby thinking to be boss I thought was a novel idea (note - I did not see last year's STORKS). The animation was terrific but again I debate if 3D animation is always needed. A 2D animation would do for most of the stories. In the time of TOY STORY and FINDING NEMO there was no 3D but they were great films. Wish that 2D animation is back with focus solely on story and plot rather than technology and gimmickry.

Voice over especially by Alec Baldwin was terrific I felt. I saw him in few films and he unleashed himself here. He seemed to be the boss and rightly so.

The detailing was good but there are few dull moments that come in the end. The end was a bit dragged I felt, at least 15 minutes short and this would have been greatly entertaining.

It's entertaining even now, but lacks short of some real punches. A 3/5 for this.

Posted by Brad Dugg at 1:45 PM No comments: Links to this post