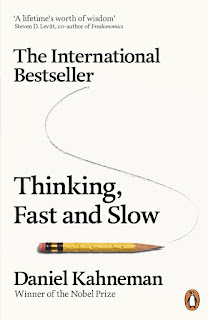 A bible for those who curiously ask themselves "Why we think, the way we think"

Although, my friend Raghuveer made me acquainted with this book, my colleague Raghav put forth a question from this book that intrigued me and pulled me into reading it. It took me two weeks to complete and it may take many more years for me to completely comprehend what this book meant. Here I am trying to just summarize from my perspective.

This book is a masterpiece on thinking itself. The first of its kind book in my reading experience.
The book begins by specifying the systems in the mind as System 1 and System 2. Few lines from the book itself

"System 1 - It operates automatically and quickly, with little or no effort and no sense of voluntary control
System 2 - It allocates attention to the effortful mental activities that demand it, including complex calculations"

There are some wonderful examples of this system and explaining how the mind works. Also, the book is filled with some clear and at times simplified, mundane examples of mental activity.

The book is filled with experiments that the author along with his friend Amos Tversky performed over the years and their learning from them. The book ignited hidden ambiguity within the mind and gave some strong reasoning. I was astonished by few answers and how these are related to statistics too.

PART 1 deals with the two systems mentioned above. To summarize this, I could say that while System 1 is driven by reflex, emotion and comfort and some cognitive bias, System 2 is takes it's own sweet time that is - it's lazy and also trying to control the thoughts. System 1 is prejudiced and hasty while System 2 is deliberate and lazy.

PART 2 gives and elaborated patterns and effects with numerous experiments. It was interesting to learn how by default mind plays the guessing game. It looks for patterns in persons, nature and almost everything in the universe. Based on the patterns it tries to guess what next or tries to help visualize the mind what is going to happen next. This is itself was an amazing insight among many other insights given Also, the book conveys the idea that gutting or trusting your intuition always may not be a good idea as intuition derives cues from previous experiences (see how pattern seekers we are).

PART 3 is named OVERCONFIDENCE and it places various factors for the same within the mind. From overlooking reality due to the effect of System 1 (prejudice) to having illusions manifested with previous consequences or by trusting the intuition. More or less, we tend to trust our senses and try to go with them and only when it does not give the desired result we are shattered and then the typical existential questions like "where did I go wrong in the first place?" pop up. The chapter "Expert Intuition: How Can We Trust It?" elaborated many aspects and throws light on some fine nuances in the thought process too.

PART 4 is where the author took Bernoulli's hypothesis (I hardly understood the technical aspects of this) and built and alternative model called "Prospect Theory". While Bernoulli's theory stated that there is the same amount of emotion involved in happiness or sadness, the "Prospect Theory" begs to differ and says the level of emotion involved in each circumstance may vary.
Simply put - find $10 is not as same as losing $10. There are many parameters that have to be considered here.

The author spoke at length about "Endowment Effect" wherein he says a person feels owed more to what he naturally possess over being owed to those that are either acquired/given/ inherited. This is a great thought I would say and this was another surprise element for me.

The chapter "Bad Events" helps us understand how the mind gives a lot of weight to the end. A movie might have a great beginning but if the climax is not good (as per our satisfaction levels) we tend to term the movie as bad. Also, another chapter "Rare Events" deals with why the mind acts in a specified manner in case of certain events. Example, people affected by Tsunami tend to be away from beached for many days.

The chapters "Fourfold Pattern", "Risk Policies", "Keeping Score" elucidate the responses of the brain in risky situations and how is risk considered understood and what it takes the mind takes to mitigate the risk.

So that was a summary of how I perceived the book. It was a great experience for me. For few aspects, I could map them to some aspects of Hindu Philosophy and even spiritual thinking too.

I am sure that those who have seriously read the book once would mostly have a changed rationale in thinking and also their perception towards individuals may be affected too. This book is strong, to say the least, but indeed it only makes us realize how much more powerful the wonderful mind is. 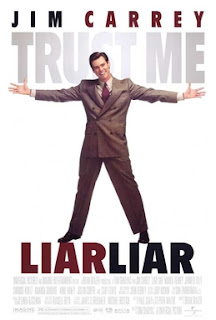 One of the great performances by Jim Carrey. A must watch.

Despite a plot that ran for a day, it's Carrey's performance that made the film enjoyable. The concept of the film is great but plot-wise I doubt if anyone would have bought the concept if there was no Carrey in the film. The plot goes like this "A lawyer who lies every day for his bread and butter has to tell truth for a day"

The events unfold is a comical yet kind of realistic way. This is the funniest courtroom drama I ever saw and it stands right up there.

Kudos to Tom Shadyac for directing Jim Carrey in a superb way. But this is all Jim Carrey's show and I loved him. This is hilarious to the hilt and it had me in splits.

A 4/5 for the film just for Carrey. A mention to the kid Justin Cooper. too. He was amazing as Max Reede. A film that's worth watching many times and I have not got bored yet. 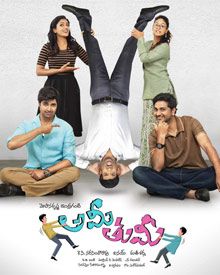 An average film that had a couple of stand out performances.

As screwball comedies have often been driven by women, this one has the same norm. The women drove the show here too.
While two men (Adavi Sesh and Srinivas Avasarala) men are relegated as almost support cast, the other two men (Tanikella Bharani and Vennela Kishore) are elevated as the main men.

Tanikella Bharani, the veteran, and a seasoned actor is at ease in Telangana slang. He put up a strong performance and thanks to the director to have given a lot of screen time to him. The maid acted by Shyamala is superb in wit and timing. She is camouflaged as support cast but becomes the woman with highest screen time and holds it well.

But this film belongs to Vennela Kishore. There was never a dull moment since his entry onto the screen. He drove, rattled and home ran the whole film. His timing and acting were impeccable, to say the least.
Especially loved his interaction with Tanikella Bharani and Srinivas Avasarala. The conversations were extremely well written.

All others have acted commendably well despite very limited scope in the script.

Story wise, it is confined and does not have the charm of Ashta Chamma (one of the previous films of this director). Yet it's a fun film if not an end to end laugh riot. I searched for Richard Brinsley Sheridan and understood that this film was inspired by 'The Duenna'. The story itself was limited but I hoped for more punch in the writing.

I liked it and few scenes/conversations can be watched multiple times for pure fun.

The director Mohankrishna Indraganti was perhaps right up there in his first film (Grahanam) and since then he has lost some intensity. Wish to see him make an intense drama again. It seems I have seen almost all his films and that itself is an accolade for him coz I seldom watch Telugu Films and mostly dislike them too.

Overall, this is an average fun ride but a point goes up only for Vennela Kishore. A 2/5 for this film. Mediocre stuff packaged as comedy.
Posted by Brad Dugg at 4:09 PM No comments: 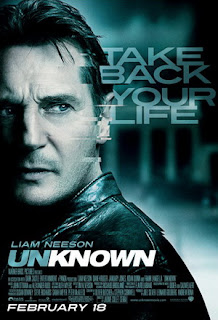 It left me with a question, "Why did I see this film in the first place?"

I cannot comprehend actually what all went on but most of it seemed pretty absurd. For some it may seem logical and nicely placed. For me, it was simply dumb. It begins with an interesting premise and the interesting part ends in the premise itself. There is no interesting progression in characters or plot. After seeing half, the expression and the curiosity in me wore out and my expression became bland and my mind was easily getting distracted.

This film is just not there. It has serious drawbacks in terms of writing and narration.