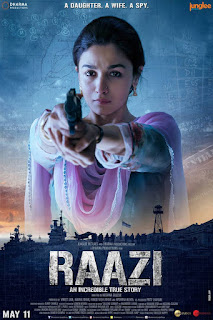 A measured and mature thriller that is free of any fuss.

It's been a long while since I saw a spy thriller that is based on history and in Hindi, I can't remember once since "Madras Cafe". Forget those "TIGER" movies, they are Salman Khan movies and not typical spy thrillers. So there is a dearth of compelling spy thrillers in Indian Cinema and here comes one and indeed this is a good one.

It is dramatic and thrilling all at once and yet the driving force in the movie are basic human emotions. Yes, patriotism is an emotion and it instigates the plot and after that, the human emotions of compassion, belonging, survival and pride take over and thus make it a more emotional film than a typical spy thriller. When I asked myself, how many times my patriotism was put to test, then the answer would be only when I see Sport. My patriotism comes to the fore when I see an Indian Cricket Match or Hockey or see Indian athletes in Olympic or world events. So apart from cheering our Indian sportspersons, my patriotism was never seen. Yet, when I see this film where each side wants to do something for their nation by serving through spies and military, my respect goes higher for them. I believe those who do anything for their family or for the nation or for the society at large have a better purpose of life than those who have individualistic goals.

To give away a hint of the plot, it's a film based on the book "Calling Sehmat" by Lt Commander Harinder Sikka. It's admirable how a book has been adopted without any voiceover or sensational background music. Even a patriotic song comes as the one that a teacher teaches school kids. There is no spoon feeding or preach about patriotism whatsoever and that is what I loved most about this film.

I am told that is indeed a True Story and there is authenticity in the film. Kashmir is not just about Pashmina silk or Dal Lake or Natural beauty. Kashmir is just another state in India that shares the border with Pakistan and Kashmir also has individuals who want to serve India. This aspect was something that touched me because we have often seen in films like "Roja" that even Kashmiris want freedom from India and while that is one point of view, Kashmiris fighting for India is another point of view.

Loved Alia Bhatt in the role of Sehmat Khan. I resisted watching this film in the theater as I was apprehensive if Alia could do justice but I was pleasantly surprised and now I am happy for making the right decision to go watch the film in the theater. Among the performances, I rate Jaideep Ahlawat's performance as Mir the highest and his dryness and composure added a lot to the character.

The editing was wonderful and the cinematography was just amazing. The most impressive of all the technical departments were costume design and production design. Just kudos for all those who put their heart out to make it look authentic and detailed. The dialogues are worth the money and are fulfilling. Just super happy to have seen a full-fledged Urdu film that has a lot of deeper meaning in almost every line. There is fun deciphering the dialogues.

Thanks to Meghna Gulzar and I am sure Gulzar Saab would have been proud of her daughter when he saw this film. I truly wish, she keeps rolling such wonderful films.

A 4/5 for this thriller that is for the intelligent and involved audience. I shall watch the movie multiple times for sheer dialogue.
Posted by Brad Dugg at 3:13 AM No comments: Links to this post 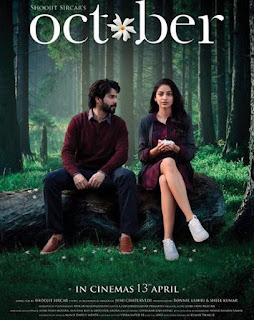 A film that justified the tagline "It's not a love story, It's a story about love".

In subtlety lies it's grandeur, in small doings lies real love and life. This film is about love, loss, and life. How one man takes when his life changes due to an accident to his dear friend form the base for the plot line and the emotion is carried till the end.

All great movies have great characters and here there are two characters, one is Dan and the other is Shiuli. While Shiuli is the driving force for Dan's transformation from a casual guy to a man who has some purpose for his life, it's the metamorphosis of Dan that made me fall in love with the journey through the film.

Varun Dhawan has certainly come of age and this is the second film where he I witnessed his acting skills and I relished them (the first film was "Badlapur"). Banita Sandhu as Shiuli Iyer is impeccable in her expressions. She had very few words in the film and she let her eyes do the talking. Well, I confess I loved her work and she is a wonderful find and hope we see more of her talent in Indian films. Then there was Gitanjali Rao as

The winner here is the team of Juhi Chaturvedi and Shoojit Sircar. They took up an issue, blend this subtly and gave us an endearing film. Thanks to Shantanu Moitra for "October Theme" and the song "Manwa", these will be on my playlist for a very long time to come.

A 4/5 for a terrific slice of life from a very passionate filmmaker.
Posted by Brad Dugg at 12:53 AM No comments: Links to this post 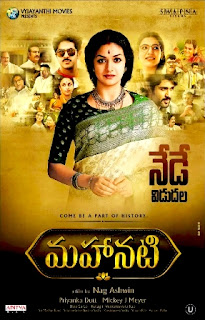 A biopic of a legendary actress well-made by a young team for this and the next generation.

Biopics are generally boring as they give us a glimpse of history which most of the audience have not been part of yet, there are gems that stand-out and this film is certainly a stand-out gem. When the life lived is legendary then the best effort must be put not to tamper with that and depict things as close to reality as possible. When drama is inherited the film blossoms but when the drama is fed externally, it falters and this film has a lot of drama within that it did not need any external source or force to build the same. Although the characters of Samantha (Madhuravani) and Vijay Devarakonda (Anthony) add some drama I believed they spoke for the audience.

The film begins on the note that why should anyone be interested or aware of the life lived by Savitri and the answer unfolds in the form of the film and yes it was worth knowing many aspects of her life which were told as fables by our grandparents and now seeing some of those fables on screen was a wonderful experience.

Also, biopics are biased and try to show the protagonist only in good light but this film justifies the fall of the protagonist beautifully. Even in her fall, I did not lose my respect for Savitri gaaru and she stood tall in my eyes. So a lot of credit goes to the writers and mainly director Nag Ashwin for the perfect balancing act.

Of all the departments, I was extremely impressed by casting. Keerthy Suresh has an uncanny resemblance to Savitri gaaru that took me by surprise, Keerthy Suresh perhaps shall win many many best actress awards for her performance. Dulquer Salman was perfectly placed as Gemini Ganesan. He did the dubbing very well and his Telugu accent suited the portrayal of Gemini Ganesan.

The cast is terrific. It has names like veteran actors Prakash Raj, Bhanu Priya, Divyavani, Rajendra Prasad and also the youngsters Srinivas Avasarala, Shalini Pandey, Naga Chaitanya etc.. while the biggest surprise was Mohan Babu as SV Ranga Rao. Mohan Babu gave a subdued and composed performance and it was a delight.

All my applause would go to Nag Ashwin and the producers Swapna and Priyanka for delivering a neat film that resembles yesteryears beautifully and yet has something to offer to the youth of today.

Thank you, Mickey J Meyer, for your background music aided well by violins of Sandilya (I knew that my dear friend Sandilya worked but he was not mentioned in the credits. The reasons are best known to makers) and many other musicians who gave a musical treat. The song "Sada Nannu" rendered by Charulatha Mani is my favorite in the album and will stay forever on my playlist.

My only crib, I wish a few episodes were cut and the song "Mooga Manasulu" felt out of place.

A 4/5 for a classic biopic on a legend.
Posted by Brad Dugg at 1:00 AM No comments: Links to this post 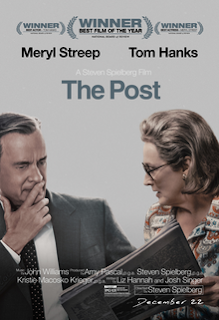 A film began slowly but has an ending that is relevant to the current times.

Freedom of Press has become extremely important as the nexus between media and politicians has increased and thus, political views are being preached through media and now newspapers have become mouthpieces of parties and most of the newspapers have given up on the idea of independent viewpoint. In these times, Steven Spielberg made a film that's historically significant and throws light on how true journalists used to be and how the press used to behave in the 1970's

A story that was triggered by one newspaper is taken as a lead by another newspaper and is indeed made the lead story. An issue was addressed sans drama and sensationalism and that's how journalism was in 1970's in America. That was what is now called as "True Journalism".

The writing was good and so was the directing, but I felt technically the film fell short in few departments like art direction, lighting and costumes and indeed the editing. I am surprised that the great Steven Spielberg let a few things off technically and certainly this is just there as one of his films but will certainly won't make the cut as one of his best films.

Having said everything, the film needs to be watched for it's intent and for terrific acting by Meryl Streep and Tom Hanks and a host of other actors.

A generous 3/5 for a film that talks about an issue and sets the right example in Journalism.

Posted by Brad Dugg at 12:51 AM No comments: Links to this post