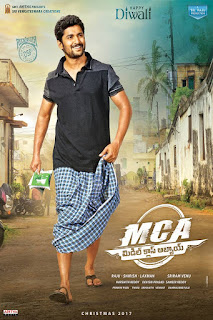 It has nothing new to offer except that the protagonist is clashing with the villain not for his heroine but for his sister in law. There is a hero, a villain, songs with the heroine and a family the hero must save.

I liked performances of Sai Pallavi and Nani, and there is nothing much I can say about other aspects of the film.

I am not happy to be ending the year with this film. This year has been a good year for Telugu Films as we got films as varied as a commercial blockbuster like"Bahubali 2" and a content-driven film like "Arjun Reddy".

Overall, an average film with laughs few and far in between. A 2/5 for this.
Posted by Brad Dugg at 9:59 PM No comments: Links to this post 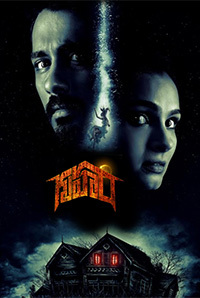 A film for the horror lovers and a one made with standards higher than typical Indian horror film.

I am happy to have seen the film, although I do not watch or even like to watch horror flicks. I do not like horror films because they are basically illogical, they do not have anything to give the audience (except a few thrills and scares) and you do not want to take fear home from the theatre. So I have many a time avoided watching horror films. This year, I watched a few and among all those, I rate this film highly.

The ghosts are shown explicitly and unabashedly at free will right after 20 minutes into the film, we see the ghosts coming every now and then. They have been peppered all over the film and the writer or director did not hold back in any way to do a build up before the big bang. That is appreciable because they did not manipulate the script and they went with their gut and their courage and belief in their script must be appreciated. Despite, too much of ghost, the film was scary and thrilling and that is where the points were scored.

Technically, this is a much better film and the backdrop, the cinematography, the lighting, the art direction and the editing everything gelled well to make a good product. I liked the editing too especially the first half which was a breeze.

Siddharth is back with good content films which is what I thought after viewing this film. I also heard there would be sequels to this and hearing that I was disappointed because I am worried if at all, the sequels would live up to the high expectations set by this film. If they want to make it a franchise, all the best for them but their sequels may not have me as a viewer.

This film is one-time must watch but as many horror films, this also has a very low re-viewing value and that's why I may not see the film again. Having said that, it's a terrific experience in the theatre. So go watch it in theatre is what I recommend.

Of all the technical aspects, I loved the sound design and I am sure that aspect will win many awards in coming days.

It's a good horror flick that will satisfy the nerves of this genre fans. A 3/5 for this.

NOTE: This is a trilingual made in Tamil as "Aval" and in Hindi as "The House Next Door" as I watched it in Telugu, I named it accordingly.
Posted by Brad Dugg at 2:24 PM No comments: Links to this post