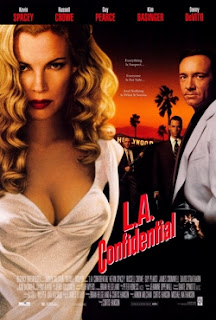 A cop film that unravels the suspense superbly.

The writing is crisp and filled up. There is never a dull moment in the film and it feels like too much happens at the end. It took me some time to contemplate and summarise the journey within my mind.

Three persons Russel Crowe, Guy Pearce and Kevin Spacey nailed the film. Crowe is one of the best cops America can hire is what I felt after the film. For Spacey, this is perhaps most accomplished performance after Usual Suspects in his career (chronologically).

I wouldn't say it was a fun ride as there were bumps too. Few points went above my head in the journey of the film and it was tough to comprehend too. Yet, in the mind they made sense and I could summarise and understand the relevance too. So, there are surprises that unravel well.

Technically, this is a brilliant film in narration, exemplary as a crime thriller film in terms of screenplay and direction. I wish there was an impactful soundtrack as the music lacked the punch needed for a thriller.

Overall, I am satisfied with the film and I am going with a 4/5. 3 stars for everything else and 1 star alone for the performances Russel Crowe and Kevin Spacey.
Posted by Brad Dugg at 10:11 AM No comments: Links to this post 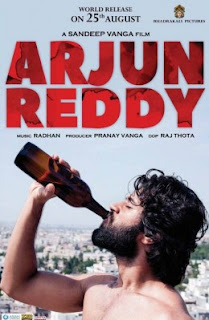 This is a generation defining film.

The character building is amazing. In one of the first scenes, after a football match fight, Arjun Reddy tells the professor who he really is and how he simply "doesn't care". That scene defines him and he maintains that character till the end. That in itself is a great consistency in narration, We have seen heroes who fall to the whims of love or emotions, but here is a man who stands up and that's what we need. Today's society needs many Arjun Reddy's (that is men who can take a stand). Also primarliy a man can become Arjun Reddy if he is excellent in what does. Mind that, Arjun Reddy was a supreme man in his profession. He is succumbed to alcoholism, drugs etc.. and that only worsens his journey as a human but nothing could touch his integrity. He gives up his dearest profession owing to his integrity and I salute that in Arjun Reddy.

I am starting to like "Vijay Devarakonda" now and I hope he is choosy in script selection and picks up only the intense and different scripts. "Pelli Choopulu" perhaps made him a household name but this film is going to make him a star.

The other characters are also pretty well defined and strong. The grandmother played by the yesteryear's actress "Kaanchana", the elder brother played by "Kamal Kamraj", the father, Arjun Reddy's friends have played their parts really well. The stand out performer though is "Rahul Ramakrishna" who plays the role of Arjun Reddy's friend "Shiva". He did a terrific job in the dialogue delivery, body language and conveying emotions through eyes. He is a real find and I hope more good scripts fall in his lap. The heroine "Shalini" played her character with a lot of poise and I wish she could cry more realistically.

Narration wise, this film is 3 hours and yet it does not seem long and that is because of the intensity in the screenplay. Each scenes unravels the journey of Arjun Reddy and each scene seemed very important. Few lapses in writing are evident but the lapses are far and few while the good scenes are too many. So narration is top notch and this coming from a first time director "Sandeep Reddy Vanga" is unbelievable. I must also add that this intensity comes from an innocence and it could come only from a first time director.

Technicalities are good too. Cinematography is right in place except for few frames, Editing is great although this film is 3 hours coz there is hardly an uncalled for scene. But above all, I loved the background music, it's going to win many awards. The songs are montage songs and they are just in the right place. Overall, given the constraints of the film, the technicalities are brilliantly used and I will give a lot of applause and credit to director.

Last year I loved "Pelli Choopulu" and in this "Bahubali" year this film is the one I loved. Hope this brings the change Telugu films have so eagerly been waiting. Don't make films to appease fans but make them for the sake of making good films please.

Before I end list of things I loved and disliked

Screenplay in the first half and almost up to the climax
Background music
Acting by Vijay Devarakonda as Arjun Reddy and by Rahul Ramakrishna as Shiva
Intense narration Sandeep Reddy Vanga
Hints of love (As an example, Arjun's Grandmother loves the Louis Armstrong song "What a Wonderful World" and Arjun has Louis Armstrong poster in his room even after he is separated from family. That shows Arjun's love for his grandmother)
Care a Damn kissing. There are too many kissing scenes and I felt all of them to be natural.
The interval scene, the shot is just amazing.

Simplified climax
The scene where Arjun calls the girl while she is playing Antakshari could have been done well
I wish there are no beeps in the film.

A 4/5 for this and I hope this film brings a change in Telugu Film writing, narration and the perspective of audience. Note this film is strictly for Adults, and only for open minded audience. For all those audience and film makers with a traditional mindset this is a slap on them.
Posted by Brad Dugg at 12:44 PM No comments: Links to this post 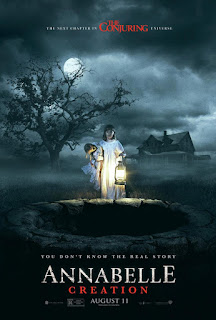 One of the very horror films, I watched and to top that, I liked it too.

Let me tell you that this film is part of "The Conjuring" film franchise and I did not watch any Conjuring films and even the earlier film called Annabelle (2014) and yet I could get many parts of the film. So in that way, this film will appeal even to audiences who are new to "The Conjuring" franchise.

There are few aspects I really liked. First and foremost, the build up and the setting. The pace was nice and I hoped this did not have any interval coz there was neither space or need for it. But being in India, the pop corn has to be sold so the interval was brought on and there was some respite from the horror. The pace in the first half was nice and the second half had a lot of frenzy and scary moments. Most of the horror is gone when you actually presume and anticipate. Though, I tried to anticipate the scares most of the times there is still a lot of surprise in the film.

The writing is apt and the dialogues were contextual which was nice. The acting by the kids and the elders was fine and appealing enough to say that they were playing characters very well and not just acting their parts. I suppose, the kids have done a lot of homework on their characters and they have brought it out really well.

The technical aspects were terrific. The production design was apt and creepy enough, the lighting was good. The soundtrack was just right up there. Of all, I loved the editing, there were almost no uncalled for moments and that is a really high point of this film.

All in all, I liked this film. A 3/5 for one the very few horror films I liked.
Posted by Brad Dugg at 6:21 PM No comments: Links to this post