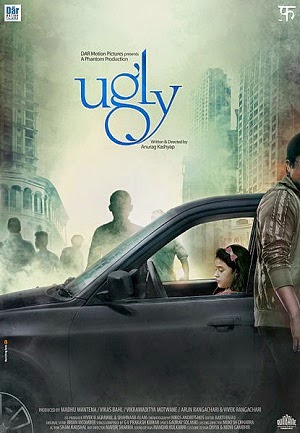 A terrific film and as per me one of the finest works of Anurag Kashyap.

I am a fan of Anurag Kashyap whom I fondly term as the "Silver lightning of Indian Film Industry". There are films, there are movies, but only few carry some real stories that is devoid of the commercial norms of the industry. He is a true storyteller and for him cinema carries a reflection of culture. Most of his films have been a reflection of the society and Ugly shows the ugly side of our society. Also, I love him probably because he showcases the unspoken truths of our society. From drugs to lust to greed for money and power, he touches upon the dark subjects and that's what makes him stand out in the mob of directors.

Also, he fights for what is right, without thinking of the commerce and the monetary aspects. Though this film was showcased world wide way back in 2013, this film got released only now because he did not want the "Cigarette Smoking is Injurious" warning to be put whenever a character is smoking. He dared the government, health ministry for that, yet the film got released with the warning. I only hope that the government heeds and agrees that warning is not needed and is ineffective. I am a quitter of smoking, but I am for the removal of such stupid warnings that compromise with the integrity of story telling. They act as distractions to the cinephile and I being one, do not like them.

Coming to the film Ugly, it's beautifully captured and brilliantly put.  This one line reviews the film aptly. OK, if I have to decipher the film department by department I would rate Background Music, Cinematography and Screenplay as the best and a cut above the rest of the departments.

Vineet Kumar Singh as Chaitanya stands out for me amidst superlative performances by each and every actor.

This is a thriller that is too real to believe and it disturbs a lot of our corrupt minds that are filled with conventional wisdom and it puts a question straight to that very wisdom. This film does not provide any answers either and that's where the disgust is created. Yet, it's for a great cause and I hope films like this are appreciated. I know this film will not make as much money as many brainless movies have made, but it deserves a place above all the rest. This film is like music for film lovers who have heard cacophony for most part of the year. There is still a hope to look at cinema as a means of story telling and not as an industry that makes money.

A 5/5 for a near perfect film, I watched from Kashyap I since "Black Friday" and a hugely debatable and surreal"No Smoking". Just loved this film and Kashyap still stands firm with his beliefs and has not yet let down in ethics or values and keeps questioning them. Salutes to him for taking all the brickbats all these years despite making wonderful cinema in a hypocritical country like India.

I was only upset that I had to see the film online, as I am not in India, but would love to see in theater again to see how an audience would react to this. Have the audience become truly intelligent or just move on being dumb and falling prey to the commercial muck?
Posted by Brad Dugg at 4:45 PM No comments: Links to this post