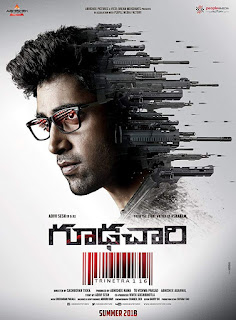 A spy film that's made with a mix of many hit Hollywood films and yet comes out ordinary.

If you have seen Kingsman the Secret Service then you can understand that Goodhchari is a film 'inspired' by that film. The emotional angle is brought in to elevate the heroics is what I felt. When there is an obvious twist in an obvious story, it falls flat and I felt the same. While the action-packed thriller seemed engaging in the beginning, it lost steam once the emotional core was revealed. It was pretty evident that the character would choose his country over everything else and thus become a hero.

He escapes in a jiffy, has all the technology at his mercy and is too smart for his opponents and these characteristics should have been put in with a lot more care. This film only uses reality for its convenience but is far from reality and I have a problem with those films. A fantasy film is supposed to be that way only but this film is neither real nor fantasy and I falls in the middle.

The film is liked by many including my family with whom I watched, but this just not my type. How can a film be put so conveniently is what I wonder and the climax shootout was too loud that I thought of shutting my ears or walking away than to face it. Perhaps, I am prejudiced with my choices of genres but that's who I am and me not liking this film is not because of my choice but because of the content of the film in itself.

The twists are obvious, indeed nowadays Telugu films are thriving on these twists and getting sold. I wish they had made this a clever screenplay with not so obvious twist. The screenplay is in shambles, it is flowing for some time and then moves on at such a rapid pace that I neither appreciated nor felt comforted with. The screenplay is in patches and is not smooth.

Of all the departments, I loved the background music of the film. The cinematography is strictly okay and other departments including casting are just fine. Also, Prakash Raj seems to be a different plane as compared to all other actors in the film. He is just himself and full marks to him to play his role with such finesse.

Adivi Sesh gave us "Kshanam" and that was way better than this film will ever be and despite no high expectations, this film disappointed me. It also has a reference to "Goodhachari 116" the hit film of Krishna.

An average spy thriller for me and all may have fallen in love, but I stick to 2/5.
Posted by Brad Dugg at 10:57 AM No comments: Links to this post 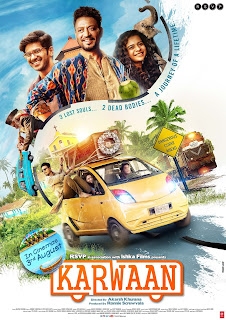 A film that must be watched for Irrfan Khan.

It's a road trip film and despite a few unwanted detours, it has its heart in the right place. It's a film that deals with death in the most practical way on screen. While each is different in characterization, yet they find something in common and that is conveyed subtly yet firmly. There are hardly any speeches or preaches except for one in the end which I felt was better edited out and there is life's journey put in a nutshell in the film.

Although the actors seem to be in good form, all fell flat in front of the master Irrfan. He is the soul of the film. He is conservative, yet has put out his quips in the simplest way possible.  Irrfan is original and natural and yet another time he puts his fine feet in the shoes of the character and makes it his own. I don't think anyone can replace Irrfan. Dulquer and Mithila have done their roles pretty well I must say, but the flair of Irrfan is something that held the film. A glimpse with moist eyes is also endearing by the master actor.

The cinematography is superb an I loved the colors of the film. The color coding made the film pleasing to the eyes and made this film an easy watch to the eyes. The writing especially the dialogues are top-notch they are simple and full of life. There is hardly a dull moment in the trip. Some scenes are actually pretty hilarious I must say and they had me splits with Irrfan's dialogue delivery. While each character has a back story, Dulquer's backstory is the one that is told in detail and it has it's space, Dulquer is the protagonist of the film and to help him find his ground seems to be the purpose of the film. Yet, everyone finds their respective love for life on the trip. Irrfan Khan (Shaukat) finds his "Mohabbat" while Mithila (Tanya) finds "Maa" and Dulquer (Avinash) finds "Photography".

The trip is rejuvenating and I am keen to watch it another time albeit at home Prime when it releases on Amazon Prime. A 3/5 for a trip worth taking.
Posted by Brad Dugg at 9:44 AM No comments: Links to this post 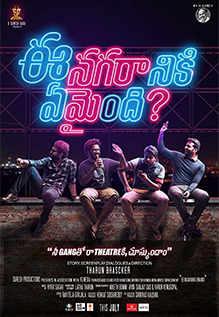 A film that began with a promise but ended without conveying a point.

It's a film about four friends and although we have seen many films in this genre it's a film where these lost friends try to find something in common as a passion and pursue. They become crew in a short film and that's where the film lost it. Had there been a better purpose, their friendship would have been more fulfilling is what I felt.

Yet this film is to be watched for the performance of Abhinav Gomatam. Abhinav Gomatam gets the meatiest part and he delivers. His dialogue delivery and comic timing are flawless. He had me in splits in most parts of the film and I felt he was the sole respite in an otherwise dull film.

Didn't understand the purpose of the female leads, while other male leads are given their part and they have pt their sincere efforts. It's definitely not the acting that let the film down for me It is definitely writing and direction. Tharun Bhascker gave us "PelliChoopulu" and I hope he gets back to those purposeful ways soon.

A 2/5 for a strictly average film. Watch it only for Abhinav as all else failed for me.
Posted by Brad Dugg at 3:20 AM No comments: Links to this post