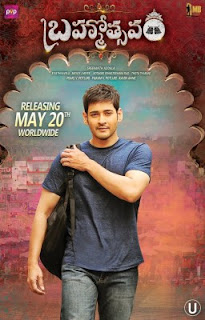 A terrible film for people like me who are anti-melodrama and anti-Telugu serials.

Perhaps, it's an excellent film for those who are overtly in family dramas and emotional stuff.

Mahesh Babu's thinking behind sharing the production of the movie makes me seriously question his rationale for choice and his decision making. I am just not OK that an actor of his caliber misused. Also, a comedian of great potential like Vennela Kishore was also not used rightly. Perhaps, he is the only actor in the whole film who brought a smile sporadically. Rao Ramesh emoted well, although purposelessly. Indeed, Rao Ramesh character is the only one I empathized.

Technically, I liked only the song "Nayudolla Inti Kaada" all the rest just did their job for the sake of doing.

I am not wasting any more words or time in this film that's so horrible for me. It's 0/5.
Posted by Brad Dugg at 8:19 PM No comments: