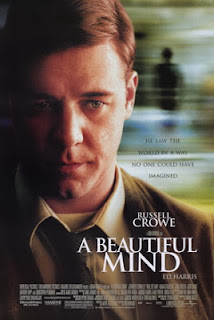 A well acted Biopic and an interesting take on a life.

How could I put this, is it the best display of a schizophrenic patient or a biopic of a mathematician who went on to win a Nobel against many odds of his own hallucinations. This is both, and indeed this movie is of John Nash (Russell Crowe) and his story of becoming one of the finest mathematicians ever who has influenced a big deal in research of various subjects.

Now, 5 minutes into a film we know there is mysterious, he fights with a friend whom others don't see now this very figment of imagination is blown out of proportion by his own mind and he goes through too many things. Now, that interesting, so there is a man who has hallucinations of seeing people, he is a real man and he has a story that is interesting nevertheless. So, Ron Howard picked it up and transformed into a better one using the screenplay which I must say is engaging in most parts as those hallucinations keep coming back. The other part is naturally mundane as those are the regular events which might happen to anyone.

Here, I mean wining Nobel prize does not happen to anyone, yet winning a nobel having such delusions is what made Nash special and that's what made this whole film special. It's tough to be understanding what Nash actually is and why is Nash, the way he is.

We are not shown of his birth nor his upbringing, we see him walk into a college as student and begin his journey there. So, there re still few questions unanswered but I would still say this a great watch and better leave those unanswered questions behind, coz the answers might have killed the interest.

The cinematography is great and so is the sound and the art design, all are at their place and there is an impetus given by the screenplay itself which I must say is near to something of masterpiece. Yet, it may have its shortcomings as I felts some scenes are overdone just to create an impact. So editing could have been crisper.

Above all, a memorable performances by Russell Crowe and Jennifer Connelly take this movie into a different altitude altogether and that's the reason both have deservedly won many awards. Also, a word about the wonderful blu-ray that provided such remarkable details.

It's a 4/5 for a movie that I must say is great and if not anything watch Russell Crowe alone perform John Nash and its worth all the time and money.