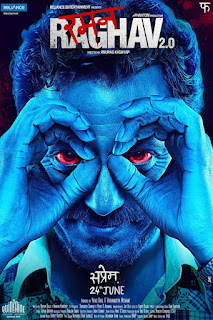 The eerie, scary and a satisfying film that I watched in a long time.

This is terrific by Anurag Kashyap and I believe he is back to his best. His best was "Black Friday" and followed it up with films like "No Smoking" and others. He took the bar of narration higher and with this Raman Raghav he is back from limbo. Last year he made a dud called "Bombay Velvet" with a lot of money. Perhaps, he was robbed of the luxury of money and was asked to find his ground. Thus, he made a film like this that is devoid of any budget.

My hunger for watching a great film has been satisfied.

I was happy with the terrific performances in the movie. Nawazuddin Siddiqui nailed his bit; this is something superlative even from a man who has set highest standards in acting. Vikas Kaushal played his part with the needed poise. Shobhita Dhulipalla was excellent showcasing her vulnerabilities.

Zodiac was the last film I can remember on a psychopath. There was a mystery in Zodiac, but here it gives a shock right in the first few minutes. You know the murderer, and you know how he murdered too, but that’s not all. He sits in leisure and explains the whole story to police. The way the protagonist narrated made my hairs stand and spine chill. It was a hard hit on me to hear such lines.

The screenplay is fantastic in the form of chapters. Anurag Kashyap used such a format for his supreme accomplishment “Black Friday” and he repeats the format here and it comes organically. The size helped a lot in killing the time. I did not even know when each chapter finished. They were engaging from start to finish. In this film, we can never miss a moment.

Writing drives the film. There is humour, horror, drama and thrill. What else is needed, engaging elements are in dialogues itself. Kudos to the writers who have done such a fabulous job.