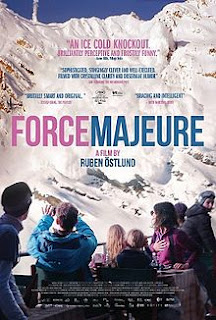 During an emergency, will you protect your family or not is the question.

The film is too long I felt strongly. The title Force Majeure means "Act of God."

I missed the fun part of the film. The conversations are up to 5 minutes, and there are some ten conversations like that. Okay, these were adding little value to the story. Once, the point is established it was about taking the point forward with an interesting narrative. Here the conversations revolved around the same point. After 45 minutes into the film, I thought it was just a drag and dozed off. I ended up completely watching the film the third time.

There are some terrific points. The concept of the movie itself is interesting. When I put myself in the protagonist's shoes, I was baffled. The director took up an interesting point and toyed with cleverly. Kudos to the director.

The writing was just too lame I felt. I believe that too much of writing was do to make the film realistic. The intent perhaps was to keep the conversations real. Alas, they made the film less fun.

The cinematography was fantastic. I felt like I was experiencing the Alps rather than merely watching them. To shoot at such an altitude in a steep terrain takes a lot of pain. For the sheer efforts of the team, I applaud them.

Editing could have been crisp. At least 20 minutes could be cut, and it would have made a world of difference to the whole film.

I loved the use of music of Vivaldi's Four Seasons - Summer. Happy to be listening to classical music in a modern cinema.

Overall, a 3/5 for a good film that could have been great.