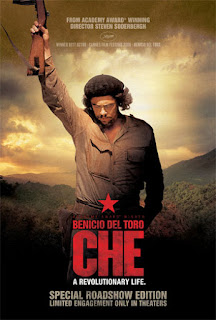 A terrific film that raises the spirit of a revolutionary to the hilt.

This movie is a 2 part biopic that runs nearly four and a half hours.
When I saw it for the first time at home on in 2009, I just took a ten-minute break after the completion of the first part and was dying to start the second part. After finishing the movie viewing, I was overwhelmed. I was very happy; there is an inspiration that I must make my life worth before I die. There is an incentive to value life.

Ernesto Che Guevara is one of the most inspirational revolutionaries of the centuries the world over. The way he organized and won guerilla wars was something that was a shock to many regimes in the American continents. The depiction of Che by Benicio Del Toro is something that took me by a surprise. Benicio Del Toro was intrepid in playing Che. Never did I feel, I was seeing an actor, all through it was just Che.

The makeup was superlative. For the first ten minutes of the second part of the film, I was stunned. I could not recognise who is playing the character. So right is the disguise and so great is the acting. Cinematography and art direction in this could be used as references for generations to come. The film took me into 1950's and 1960's and made live in those times.

From the word go to the last frame, there is perfection in craft technically. The spirit of revolution is in place. Cuba, Fidel Castro, Revolution, Bolivia, UN conference, Che, wow so many overwhelming elements.

Kudos to Steven Soderbergh and perhaps this is his finest effort. Also to Benicio Del Toro. Benicio, you will live on as Che forever.

A 5/5 for my favorite revolutionary films. One of the all-time great films this.
Posted by Brad Dugg at 12:57 AM