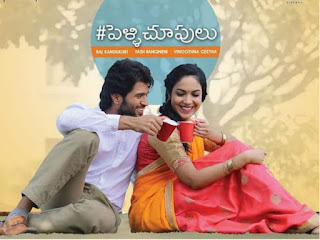 After a long time, I enjoyed a Telugu Film and felt happy after coming out of the theatre and also watch it another time. Last time I had such a feeling for a Telugu Film was for "Mithunam" and it was four years ago.

The good thing is that this film does not have any dances, there are no fights, there are no melodramatic dialogues. Though the sentimental part drags the movie, the humour overtook the drag and added a pull. It's the fun I took back home and was happy with the feeling this movie gave.

The protagonists were new for me and of all the characters I liked the character of "Kaushik". It is played by "Priyadarshi". Of course, the film belongs to Ritu Varma as "Chitra" who reminded of "Roopa" in Anand (Anand is a 2004 film).

It's refreshing to see a new director make a movie that's terrific in content (the writing, narration) and make the actors do an excellent job. Kudos to Tharun Bhascker. He has a long way to go if he sticks to non-commercial films and believes that content is above all else.

The cinematography and editing are two departments which impressed me. The camera was invisible, as there are no specific long shots. The whole movie is shot in a straightforward and realistic way which is a huge bonus. From locations to interiors decors it was all well put and also colorful at the same time. There was life all through the film and hardly there was any dull visual. Also, the film was fluid with very few dull moments (dull moments were mostly in the sentimental last half hour). The cuts done were nice; there were no jump cuts and it is simply put. So, Telugu Film Industry can look forward to Nagesh Banell the cinematographer and Ravi Teja Girijala the editor. These are two good finds from the film.

I was impressed by the use of music too. Taking the budget constraints into account Music is a commendable job done by Vivek Sagar. I loved the usage of the song "Raalu Raaga Poolamaala." Also,  I must appreciate a huge fact this film is done in Sync Sound. That is there is no dubbing used; a terrific challenge is handled well and the results are seen in the movie.

I am not putting the story or any dialogues out here. I am sure the Telugu Film Audience will embrace a film like.

A 4/5 for a Telugu Film. A rarity from me but this is one film I will watch multiple times.
Posted by Brad Dugg at 1:04 PM