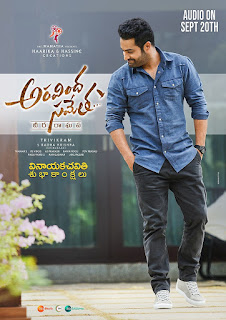 A movie that did nothing to me except making me appreciate the dialect of a place.

This is a faction film that runs with the message that “the one who stops a war is greater than one who wins it”. This is indeed agreeable but the way this message is conveyed in a preachy tone is a problem for me. This is a film that has a lot of violence and yet tries to showcase as a soft film where women are shown to be better rulers than men. It’s agreed that women are sensitive and are more compassionate than men, yet that being taken as a primary reason to hand over power did not seem convincing to me.

NTR is indeed a terrific actor but he needs a good script and let me say this “till the day he is constrained by commercial aspects of films, he cannot realize his own vastly untapped potential”. Among all the aspects of the film, I loved the way, the actors enunciated the dialect of Rayalaseema. That's the only refreshing thing in an otherwise typical film.

Trivikram gave me two of the best commercial films in Telugu in the form of “Athadu” and “Khaleja” and although he has the ability he doesn’t want to take any risks financially is what I could clearly see in this film.

This is just okay film and a 1/5 for the acting of NTR and the song “Reddamma Thalli” especially the heart-wrenching lyrics.
Posted by Brad Dugg at 7:31 PM