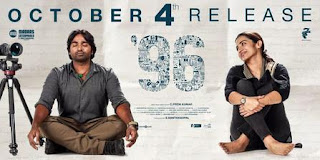 A walk down the memory lane with the first love has never been more mature than this.

To be frank, there is nothing that one can strongly dislike, but for me, the WhatsApp chat messages messed up the emotional feeling a bit. The journey overall was nevertheless beautiful.  It's a film that is emotional and drove the emotions pretty well. It's realistic, subtle and keeps the emotions clean. It never messed up once with the feeling and the love between the teenage Ram and Janu seemed genuine.

I was in school in the 90's so I could correlate to this story, although I never had a love story in school. If ever there was one, then perhaps it would be in this way I think. More of the eye and fewer words. The flashback story was beautifully done.

Above all, I loved the character development in the film. The film began with the song, there is no dialogue nothing, just as the titles ended, the film cut into a song where a photographer captures many aspects of nature. The song was beautifully shot and the music is extremely good. That song is named as "The Life of Ram" and even now, I am listening to that song. It will be in playlist forever I think. Also, never did I see the protagonist directly shown as living his profession. It's for the first time I suppose, I have seen a photographer's journey in a film through a song.

The story seemed very much of Ram till the point Janu entered. She owns the story and brings her own perspective. It acted like the perfect foil for the straightforward Ram. Janu even interprets one scene from 2 perspectives and that is also subtly placed. Felt like 'Rashomon for a scene.

Also, the journey they underwent for a night was beautifully captured in a terrific composition 'Thaabangale'. This song too will be in my playlist for a long time. Just hats off to the entire crew to take a normal story and yet make it one of the most memorable ones.

Director Prem Kumar must be credited and applauded heavily for the right cast and content. There are hardly any dull moments in this film, where mostly we here 2 people talking. Such is the strength of the writing that it would be sad if I had not loved what I saw. He succeeded in making me in fall with the film. The only glitch if any is the duration of more than 2.5 hours.

This film will definitely last as a memory in your lifetime. Thanks, everyone who worked especially Ram (Vijay Sethupathi) and Janu (Trisha). A 4/5 for this memorable film.
Posted by Brad Dugg at 11:06 PM