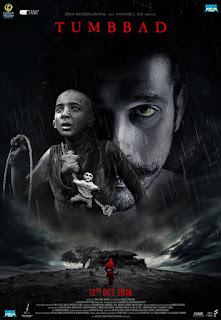 An original thriller that spans generations and will stay that stay for generations to come.

It's like the story that we hear from grandmother's and grandfather's as if there was a legend to a place. It's mythical yet fascinating and that is the selling point of this fantasy thriller Tumbbad. Never have I seen a film, where so less is explained and so much is left for interpretation. I have got to know the story of Hastar more through the internet and through discussions with friends than the film itself. That is what made the film extremely interesting and indeed terrific.

The film is publicized as a horror film, I did not feel so, I felt that this film is more a dark-thriller that treads the path of noir films but has its mystique held till the last moment. The acting is superb by each and everyone and apart from the protagonist Sohum Shah (Vinayak Rao), the kid who played his son (Mohd Samad) did an outstanding job.

The story is narrated in rich imagery in a pre-independence period backdrop. This is the most visually appealing film I’ve seen this year. Cinematographer Pankaj Kumar and production designers Nitin Zihani Choudhary and Rakesh Yadav have done a great job in paying attention to the details like the types of doors, the vessels and even the locks used they look antique and authentic. I felt it's more like a Marathi film than a Hindi film and that is indeed a compliment to the film.

Human greed is a very convoluted and underestimated emotion that is rarely captured in modern films and here comes a film that is visually stunning, verbally minimal and emotionally heavy. A definite watch and I am sure this will stand the test of time.