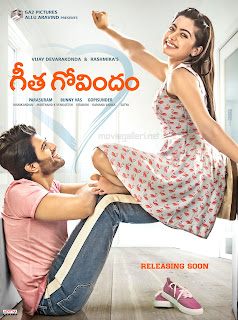 A film that shows how fabricated an actor can become in a manipulative script that is based on false emotions.

From the word go, I did not get a good feeling. The first scene where Vijay Devarakonda(aka Vijay Govind) asks for a drink looks so so out of place, it made me feel why are they giving a reference to 'Arjun Reddy' here just to pull the audience. Is it necessary?? Does it add anything to the film? I was doubtful and when I started to feel that the script and the film are actually based on a scene where the hero deliberately (oh, sorry accidentally) kisses the heroine, I shut my mind and just whiled away my time just watching and accepting that it happens only in films.

A film that is manipulative and extensively fabricated with fake and created emotions rather than natural feelings. The characters too pretend as if they don't know what happened between the male and female protagonists and that upset me even more.

Of all, I liked the audio of the song (Yenti Yenti, yes not the video) and all else is just so not for me.

A 1/5 from me for a film that I did not have high expectations about and yet it could not fulfill my least expectations also.
Posted by Brad Dugg at 12:52 AM