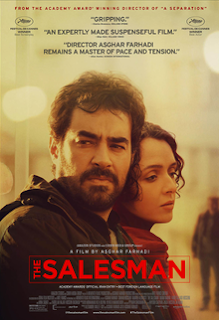 Another powerful and yet a poignant realistic film from Asghar Farhadi.

There was "A Separation" and now this from the same director. Oh, there is another good film "The Past" from him too. But, "A Separation" and this film stand in a different league altogether. I have not seen any of his films prior to "A Separation" but since that film, I have watched the afore mentioned films and all the three are impressive. Here is a director that demands respect not just for his work but for the way he works. The resources (human and technical) are very few in Iran as compared to other countries like France, USA or India and yet Asghar makes the story telling so compelling that the technical aspects almost take a back seat and as a viewer, I am in awe of the power of story telling by this man.

The acting by each and every actor is amazing but amongst all the superb performances, the performance of "Shahab Hosseini" stands out. His intensity and passion are worth a standing ovation. I suppose, Iranians have a lot of passion within them and it transpires with their work. Be it the camera or the direction or the acting and for their passion, I salute them.

Strangely, no one in the film is actually a Salesman, but the title is derived from the Arthur Miller's play "Death of a Salesman". There are a lot of symbolic relationships shown through the play. There are humiliation and dejection in protagonists life as they are in the Salesman's life in the play. The relationship between wife and husband has some references and while what shatters and falls in the play, is symbolic of the faltering relationship between the main leads.  I do not want to say more and reveal the plot but I must say the last half hour is riveting and the film takes a completely new direction and ends in a surprise and this is the best part of the film.

A 5/5 for another riveting drama from Asghar Farhadi which is superbly written acted and captured.
Posted by Brad Dugg at 9:19 PM