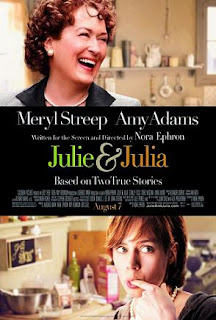 A good film on cooking that is superbly written by a good writer and acted well by two terrific actresses.

Amy Adams as Julie Powell and Meryl Streep as Julia Child make this journey worthwhile. By the time she acted in this film, she already had many innumerable awards and nominations for her and that's why she is perhaps the greatest actress ever. Her acting in this film was terrific, to say the least, and was awards-worthy and deservingly she got many awards for her portrayal of Julia Child. Had Julia Child been alive she would have been proud. But the surprise package was Amy Adams. I saw this film for the first time in 2010 mid and I was going gaga for the performance of Amy Adams over Streep's performance. When I watched it yesterday it re-emphasized my point.

The performance of Amy Adams is relatable, straight and almost without any histrionics or aids while the performance of 'Meryl' was aided by accent, the embellishments of Paris and the period in which 'Meryl' that is Julia's life was set in. I must say I loved both the performances and perhaps Meryl's a bit more.

We meet a distressed Julie Powell in the post 9/11 America (New York) and we meet a garrulous, flamboyant Julia Child in the post-World-War 2 France (Paris). From the first frame till the last, there are parallels drawn in lives of the two people and the intercuts are well done. I don't think there is a film is last so many years that is based on food and has two different time periods being entwined in a screenplay that is based on two different books.

The screenplay is adapted from the books of Julia Child and Julie Powell and is wonderful. There are hardly any dull moments in the whole film and I give full credit to the writing and also the editing. The editing is slick and at times I was pleasantly surprised too. This is a film for the food and film lovers. Both have enough to savor from the film and Nora Ephron proves once again why she is such a romantic person. Her another film"When Harry Met Sally" is one of my favorite romantic films too.

Charming witty and full of flavor this film showed two personalities who lived their life to the fullest. Amazing to see and lot to learn from them. A 4/5 for one my favorite films on food.

My Review of "WHEN HARRY MET SALLY" here
Posted by Brad Dugg at 12:58 AM