PHILOSOPHY WHO NEEDS IT 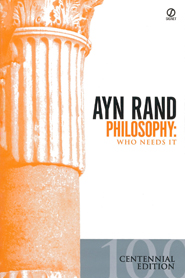 This is a powerful book and there are few books that question our own faith and also give us an alternative way of thinking, this is one such book. A collection of essays by Ayn Rand edited by Leonard Peikoff, this books has all it takes for a must read book.

I was introduced to Ayn Rand with her novel "The Fountainhead" and in my exploration of Ayn Rand and her thought process, I supposed that this book "Philosophy: Who Needs It" would help me know more about Ayn Rand and her philosophy and also try and see if I can drive few principles that I can implement in my own life. That was 2006 when I first read this book. Even today, that is 11 years later it stands tall and has almost got a divine place in my mind. There is too much to say and how much ever I review I cannot complete the substance enough.

Ayn Rand seems to be a mix of many contemporary and also the oldest philosophers. For me, she is a mix of Nietzsche, Schopenhauer and one of the one earliest philosophers, Aristotle. Also, she rants against altruism. Rand made altruism the root of all evil in the existing world and that was a radical approach and the thoughts are put so very objectively that I could not help but heed to her words in the book.

The book begins with the chapter "Philosophy: Who Needs It" and in this, she strongly puts the need of Philosophy and also giving examples that everyone indeed has a certain philosophy of living that makes his/her own way of life. In "Philosophical Detection", she conveys that every man ought to have the eye for discrimination to understand the difference between the "fundamentals" and "derivatives". It is the fundamentals that form the core philosophy for a human.

Then, she moves onto differentiating the metaphysics and the artificiality of humans in "Metaphysical Versus The Man-Made". In the "Missing Link" she gives examples to help us understand the method by which mind habitually deals with the content in the mind. Also, I encountered a beautiful term "Psycho epistemology" which I cannot explain in a blog but is worth reading about in the book.

Then, my favorite and perhaps a powerful chapter "Selfishness without a self" arrives and here, she talks about the herd (collective mankind following faith and beliefs with irrationality). This herd has a basis for what they do and they believe what they do is right. "I did this based on an existing and well-accepted principle, so it is right" is what herd (referred to as a pack of wolves) says in the real world. Personally, this stands as my favorite in the book.

In the chapter, "An Open Letter to Boris Spassky", she writes a letter to the Russian chess champion explaining her views on Capitalism and why real world rules in soviet union are unbearable if it had to be chess game

In, "Faith and force: the destroyers of the modern world", she attacks Mysticism, Collectivism, and Altruism brutally and also reasons out how Immanuel Kant wanted to save altruism through mysticism. "From the horse's mouth", gives examples of modern philosophers who disagreed with Kant and also debates with the existing "Kantians". Again, in the next chapter "Kant versus Sullivan", she debates on how many people in the current world need the help of "Annie Sullivan" (Annie Sullivan is the teacher of Helen Keller). This chapter takes reference from the play "The Miracle Worker"

In perhaps, the most talked and rather the most controversial chapter "Causality Versus Duty", Rand kills the conventional concept of duty and says "Duty cannot be for self-interest or virtue; driven by parents, church, and government". She goes on saying that life or death is the fundamental alternative. The only obligation that matters is a personal promise as per Rand.

"An untitled letter" conveys how the ability is the biggest challenge of man. To understand whether one is "able to do" or "not" is the biggest challenge for a human being. She gives a good number of examples to put the point. Although I could not relate to many of the examples, I could understand what she was trying to convey. In "Egalitarianism and Inflation" Rand talks how these two words are tough to understand and are more often than not misconstrued and misinterpreted.

In "The Stimulus and the Response" she talks about how power/muscle without consciousness leads to destruction. In "The Establishing an Establishment" she talks about how funding through government bring an enforcement and how only a few exceptional men can withstand and break through censorship. In the chapter "Censorship: Local and Express", she gives lot more details on these points.

"Fairness Doctrine for Education" conveys that fairness cannot be applied justly. Fair in itself is a perspective and what doctrine means a set of beliefs by an Orthodox organization. This is not justifiable as per Rand. There should be fairness in teaching all ideologies as against set principles and ideologies.

In "What can one do" Rand conveys action items of which I am listing a few which I believe in doing
In "Don't let it go", Rand tells to have conviction, fight for reason and to have a sense of existence and also be responsible for what we do.

To sum it up, this is a powerful book. Ayn Rand has been of great influence on me. She made me question the existence of GOD. She made me believe that above all "What we do" matters. How selfishness is the root of all good things that we do.

This book helped me shape my character and I owe some part of me to the books by Ayn Rand. A 4/5 for this. A must read for all those who believe in reason, selfishness, and objectivism.
Posted by Brad Dugg at 12:39 PM