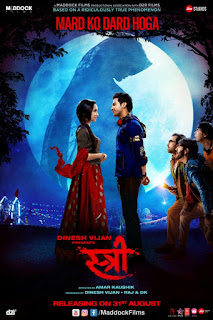 A rustic film that thrills more than horrifies.

I was happy by the end of the film, despite few illogical aspects and the existence of a devil. I was pleased to see an film set in the country side and has those characters itself. There is no camouflage and it's all given to us as it is. In villages or in rural India, there are many stories like 'Stree' being told but to bring it to the screens without much drama is a commendable effort.

Rajkumar Rao and Shraddha Kapoor did their roles well and so did all the supporting cast. Looks like the whole cast is on top of their game. The role that stood out was Pankaj Tripathi as Rudra. He brought out the original flavor of the central India and the dialect, his body language and his appearance enhanced his character and the whole film in a big way. The film comes into it's own since Rudra entered and each time he is thereon screen, a bone is tickled

The originality comes from the fact that a folklore story has been depicted without much frills and drama and in the end there is ambiguity. The only aspect of concern was the length, few moments in the second half were unnecessary I felt. It's a horror comedy that resembles the rural India in it's own fears and scares.

The camera and sound departments did wonderfully well to provide the eerie atmosphere needed for this film. The setting in Madhya Pradesh and the shoot-on-location helped a lot. The locations, the people, the environment seemed authentic adding value to us as a viewer.

This is the second outing for Pankaj Tripathi and Rajkumar Rao together after a wonderful 'Newton' and they seem to have great chemistry on-screen. It's endearing to see so many good actors together.
Despite it's flaws, it's fears and hilarious scares, 'Stree' conveys an important message and that is the icing on the cake.

I liked it when I watched it in theaters and also when I revisited it now. A 3/5 for this.
Posted by Brad Dugg at 11:40 AM