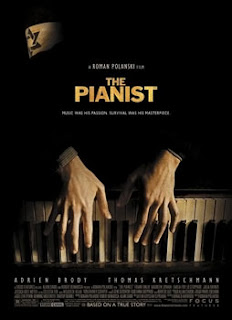 A great film on a World War Two jew survivor and not someone who is a hero or a fighter and that is unique in itself and the best thing about the film. It's as real as it could get.

The Pianist is based on the book by the same name written by 'Wladyslaw Szpilman'. Szpilman is a Polish Jew who is a Pianist in Warsaw and this film is about his survival. He survived through his own instincts, luck and stoicism and this film just showcase the same, it does not dramatize and we witness what Poland went through from 1939 to 1945.

The film does not have any urgency and takes its own time and that for me is the point about this film. I like films that take space and time to set things up. The establishment of the protagonist as the finest Pianist in Poland, the announcement of World War Two and the inhuman nature of the German Soldiers towards Jews, it's done and setup taking a considerable amount of time before the survivor story kicks in and gives us few lumps in the throat and goosebumps.

When I first watched this film, it left an indelible mark on me and even as I revisited this recently, it still feels fresh and left the same impression as it did in the first viewing. Thanks to the writing of 'Szpilman' and the screenplay by 'Ronald Harwood' there is hardly a dull moment in the film.

The acting by each and everyone is impeccable and for his acting as 'Szpilman', 'Adrien Brody' was deservingly awarded the Academy Award (Oscar). The technical departments like the Art Direction, the Sound and the casting are all pitch perfect and they transcend us flawlessly to the times of war and transport us to Warsaw.

One of my personal favorites is the usage of music and the one scene where the movement of fingers (without touching piano) is shot with Piano music playing in the background stood apart and that heart-rending scene won me over.

A 5/5 for this. Can't rate it any less a must watch for many generations to come.
Posted by Brad Dugg at 3:08 PM