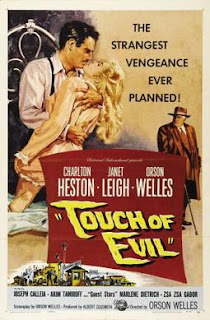 One of the finest opening scenes, a film has ever got. Great from the word go.

This film directed by Orson Welles, need to be watched multiple times to understand the careful scene setup, the camera angles and the intercuts in the screenplay and how the story moves forward by characters. There is action certainly but it gels so well with the plot that it seems very organic and that's the beauty of the construction of the scenes.

The opening scene of 3 minutes that is continuous and shot with very few changes in angles, and just follows the leads is amazingly done. I suppose it's a superlative achievement in the history of cinema itself.

Orson Welles and his cinematographer, Russell Metty, were meticulous in the construction of every scene, the characters and entangled in the shots that resonate the feelings. There is a sense of claustrophobia in the film depicting that the characters are locked in their own emotions. The story although told linearly, it feels like there are scenes in a loop.

The writing is great too, yet to get to the dialogue, it took me 3 viewings till date Yes, the plot is kind of labyrinth and the direction extremely calculated. So, I was engrossed in these aspects more than the story itself.

This is a great work of art and passion for sure. watch it for Orson Welles, his direction and yeah, he indeed acted too and his character of Quinlan is something that I had cherished for all its eccentricities. I am not sure if there is an ever a director who indulges in his own character as much as Orson Welles does.