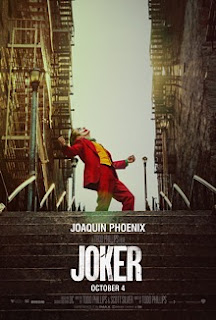 The physical, the psychological and the metaphysical senses would be satisfied.

A Joker is enough for those Super Heroes (Marvel or DC). Joaquin took this character to another level. A director Todd Philipps did more than what Christopher Nolan did with "Dark Knight". It's amazing. and yet a beautiful film. It asks questions on upbringing, parenting, how circumstances around influence the character of a person. It explores, how oppression can make a normal human turn into a rebel or rather a JOKER.

It's definitely not an easy film to watch, it's psychologically disturbing and yet there is deep empathy that develops through the journey of the film. The Joker while attempting to humanize the antagonist in the beginning, doesn't glorify him, it sustains a fear of what could Joker evolve into. He turns out to be a monster nevertheless. It's also a statement on unchecked illness and disturbed childhood and what effects it could have on the mind of a person and what it could lead to eventually.

The film is extremely real sans visual effects and CGI and that I thought was another best part of the film. The cinematography by Lawrence Sher brought out real times, real people, real locations and real emotions on the camera. The movie did not need any tricks to show us what if feels to be just oneself.

The character of JOKER is heavily layered in each aspect. Just the way he laughs is hysterical, funny, empathetic and sad all in a laugh. To bring such versatility to histrionics, I think no one better than Joaquin Phoenix can do. Although his performance deserves an Oscar unquestionably, I doubt he will be ever given the Best Actor Oscar, the best possible chance is to get a best-supporting actor Oscar. The reason I think so, it would set a bad precedent to award a tremendously dark character and the conservative Academy may not do so. I would be happiest if he truly gets an award.

The story has references to Batman - Bruce Wayne but not many so it's a complete JOKER film. Well, I forgot to mention Robert De Niro, he does a cameo that's sweet and memorable. Also, Zazie Beetz brought the human aspect in this otherwise dark inhuman film.

Thanks to Todd Philips for giving us a dark take on JOKER and for making us walk out of theatres with a film that's worth a watch once in a lifetime. Once you see it, it never gets out of head, it's such an impactful film.

A 5/5 for JOKER. My favorite dark film so far of the year.